The hype around the electric mobility and battery materials which earlier seem like a bubble has now already started to shape up on the ground in the current market conditions. The market share of electric vehicles is increasing in almost all major economies with Norway leading the pack at 46%.

Almost all mining majors have joined the race for battery materials and time seems right for Cassini Resources Limited (ASX:CZI) to curate its portfolio of critical projects, serving to the market demand in future.

How was the last quarter for Cassini Resources: Read here

Yarawindah Brook project, on an agricultural land, is located almost 130 kilometres Northeast of Perth. The project lies on the prospective ground for Nickel, Cobalt and Copper and extensive drilling for the mining property is ongoing.

The Yarawindah project has limited Nickel, Copper and Cobalt exploration, despite a favourable regional setting, prospective geology and near-surface occurrences of nickel and copper mineralisation. 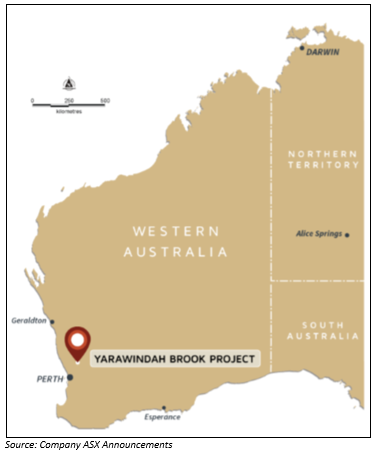 As per historical exploration, the platinum and palladium enrichment in the superficial heterogenous layer indicates the possibility of a large nickel - copper - cobalt sulphides system.

The previous drilling program was in 2007, unveiling-

CZI recently undertook the first-ever diamond drilling program at the project, targeting various electromagnetic anomalies from the airborne and ground electromagnetic surveys of 2018. Historical drilling focused only on the main Yarawindah Prospect and targeted only the shallow, supergene platinum and palladium mineralisation.

As per the current understanding, following factors go in favour of the Yarawindah project-

The first two drilling holes intersected over 50 metres of metagabrro, which have intruded into and are intercalated with pyrrhotite- and pyrite bearing mafic and felsic country rock gneisses. The project is still at a very early stage of exploration and would develop over time before reporting any possible economic mineralisation. 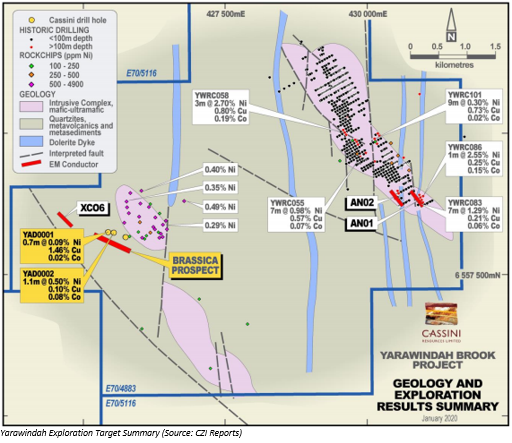 The first two drill holes intersected over 50 metres thick mineralisation containing traces of Pentlandite ([(Fe,Ni)9S8]) and Chalcopyrite (CuFeS?). The Brassica prospect or the XC05 Conductor is located almost 4km to the southwest of the main Yarawindah Prospect.

Early Results from Drilling at the Yarawindah Project: Must Read

Drilling at Yarawindah has resumed, and the third hole drilling is already underway. On completion of the third drilling hole, other targets at main Yarawindah pit would be focussed thereafter to work on the AN01 & AN02 conductors, which are believed to be extensions to previously identified mineralisation such as 7m @ 1.30% Ni and 0.22% Cu in YWRC0083.

Downhole Electromagnetics (DHEM) will survey all the drill holes to assist in identifying and scheduling further targets. The drilling schedule has been planned considering the crop harvest at each of the drilling targets.

Though Yarawindah is an early exploration project, it might propose the possibility of presence of multiple commodities from multiple deposits assuring low cost and long life. Cassini Resources holds a portfolio of promising projects and continues to explore and develop them.