Xplore Wealth Limited (ASX: XPL), formerly known as Managed Accounts Holdings Limited, is one of Australia’s leading independent specialist platform provider. For over 14 years, the company has been successfully providing investment solutions to its clients.

The company offers a broad range of platform solutions, including off-the-shelf and bespoke offerings, with access to local and global markets. Xplore Wealth has been providing solutions to over 150 financial services groups, including IFAs, stockbrokers and institutions. The company has made significant progress over the past year in rebranding and repositioning Xplore Wealth with an expanded set of products.

The company is executing a number of growth strategies and initiatives that aim to improve profitability. In order to cater to the sophisticated client investment needs, Xplore Wealth has been planning new product offerings, which will support its loyal advisers and clients.

Managed via a single ecosystem with streamlined reporting, Xplore Wrap delivers access to a host of managed funds, ASX-listed equities and international securities on 28 exchanges. As per the company’s Non-Executive Chairman, Peter Brook, this product offers a genuine range of investment solutions to meet a choice of client need.

This is the first platform solution that the company has rolled out under the recently rebranded Xplore Wealth.

Rebranding of the Group to Xplore Wealth: In March 2019, the company witnessed the execution and rollout of the new branding for the business, Xplore Wealth, which was positively received by clients, staff and the general market.

The rebranding was done to support the consolidation and simplification of the company’s market offering, bringing together the managedaccounts.com.au and Linear brands under the one new umbrella brand. Further, rebranding enabled the company to implement a marketing strategy, where the Xplore brand is linked to the underlying products Xplore MDA, Xplore Wrap, Xplore PAS, Xplore Outsourcing Solutions.

Over the past few years, the company’s Funds Under Administration have been on a growth trend, as depicted in the below graph. 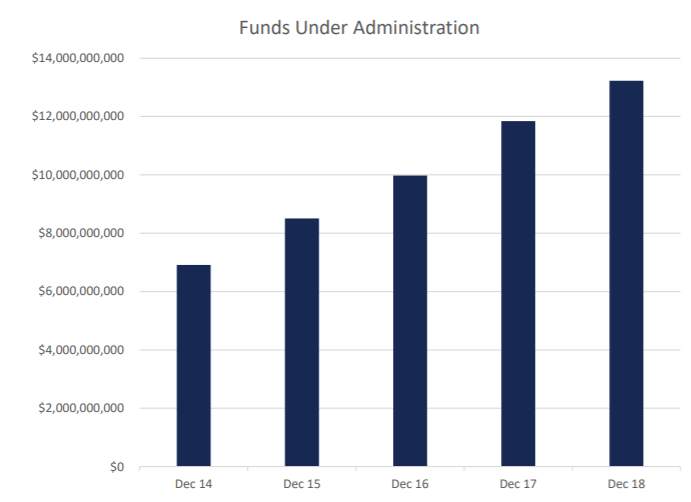 In the March quarter, the company reported Retail Client Gross inflows of $227.39 million and Net Inflows of $34.4 million. Gross Flows over the quarter were up strongly across both the Retail and Institutional sides of the business.

During the March quarter, the company was appointed by First Point Wealth Management Pty Ltd to provide a new Managed Discretionary Account service, a significant achievement of the company.

With its new product launches, scalable technology and upgraded capabilities, the company believes that it has an exciting future.

Board Changes: Xplore Wealth has appointed highly experienced Bruce Hawkins as the Group CFO. Mr Hawkins holds a Bachelor of Commerce from Deakin University and alongside, is also a Chartered Accountant.

In addition, the company recently announced the resignation of its Non-Executive Director, Ms Pamela McAlister. Ms McAlister was appointed as an Ombudsman with the newly formed Australian Financial Complaints Authority (AFCA) and with increased demands of her role with AFCA, she decided to step down from the Xplore Wealth Board.

Mr Alex Hutchison, who is currently CEO of a prominent industry super fund, will replace Ms McAlister as a Non-Executive Director.

Additionally, the company also announced the appointment of Ms Sanja Petrovic as Head of Information Technology. Due to her extensive IT experience across various aspects of the IT function, she has been a great fit for the role of Head of Information Technology. Further, the company has announced the appointment of vastly experienced Luke Peterson for the role of Relationship Manager within the Distribution team, strengthening the company’s management team.

On 3rd July 2019, the company released a notice regarding the change of director’s interest, highlighting that its Director Mr Peter Raymond Brook has acquired 100,000 ordinary shares at a price of $0.105 per share, taking the total securities held by Mr Brook to 319,333 ordinary shares.