Leading mid-tier Australian mining company, Sandfire Resources NL (ASX: SFR) is in the business of producing base and precious metals. The company is focussed on acquiring and exploring properties and projects in locations which are considered highly prospective for significant economic discoveries. Sandfire Resources is having a significant amount of interest (19.4%) in unlisted exploration company, Andes Resources Ltd.

Andes Resources Ltd and exploration and mining company, Metminco Limited have been discussion with regards to a proposed merger. Today, Sandfire has noted an announcement in which it has been advised that Metminco has signed a binding Bid Implementation Agreement with Andes Resources to create a leading Colombian gold explorer and developer, with a dominant position in the richly gold-copper endowed Mid-Cauca Gold Belt.

The merger is receiving strong support from Andes’ largest shareholders Sandfire Resources Limited and Bullet Holdings Corporation and Andes board of directors.

Sandfire has indicated an intent to commit ~$1.165 million in aggregate to the merged entity to potentially become a 15% shareholder in Metminco following the close of the transaction.

Currently, the merger is conditional on a number of conditions, in particular a minimum acceptance of 90% and the completion of a total $4 million capital raising including funds raised by both Metminco and Andes.

To support the proposed Merger, Metminco has completed a strongly supported placement of convertible notes to raise $918,000. Besides this, Andes is also in the process of completing its own working capital placement to raise up to $750,000 on analogous terms. 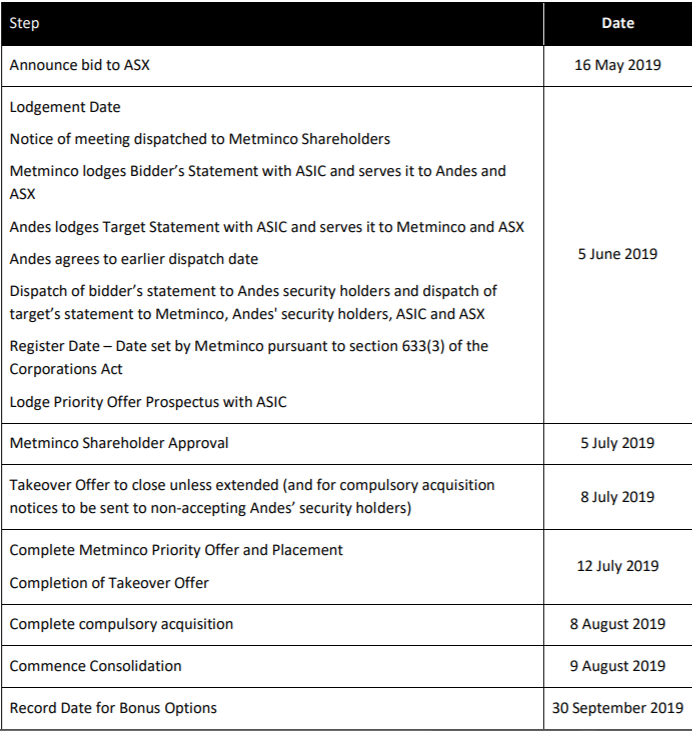 Metminco is planning to undertake a capital raising conducted at a price of $0.002 per share (for $2.33 million). Sandfire has confirmed to Andes and Metminco that it intends to subscribe for approximately $990,000 in new Metminco shares under the Capital Raising, which would result in Sandfire potentially being a 15% shareholder of Metminco upon close of the Merger and Capital Raising.

CLICK HERE FOR YOUR FREE REPORT!
Tags:
Mining SFR
All pictures are copyright to their respective owner(s).Kalkinemedia.com does not claim ownership of any of the pictures displayed on this website unless stated otherwise. Some of the images used on this website are taken from the web and are believed to be in public domain. We have used reasonable efforts to accredit the source (public domain/CC0 status) to where it was found and indicated it below the image.