Prescient Therapeutics has one of the richest clinical pipelines with several clinical trials being conducted at some of the most prominent cancer research centres in the United States and Australia. Prescient is actively involved in the clinical and commercial advancements of its two unique drug candidates, PTX-200 and PTX-100. It has recently entered the exciting field of cell therapy, namely CAR-T.

Prescient’s significant progress and accomplishments during 2019 is demonstrated by promising clinical trial results which further determines the strength of its business strategy, the value of its clinical assets together with dedication of an exceptional management board. Let’s take a walk-through Prescient’s 2019 Journey and dig into some of its main achievements-

Prescient’s clinical progress during 2019 was evident from the commencement of Phase 1b Clinical Trial for PTX-100 in patients with multiple cancers using a basket study approach designed to bundle groups of patients based on the type of mutation driving their cancers, rather than traditionally treating based on the tumour’s location.

Basket trial bundles identifies patients carrying this mutation and switches it off with a targeted therapy, revolutionizing the future of clinical trials.

In FY2019, Prescient remained on the path of advancing its promising pipeline of small molecule targeted cancer treatments through the clinic. 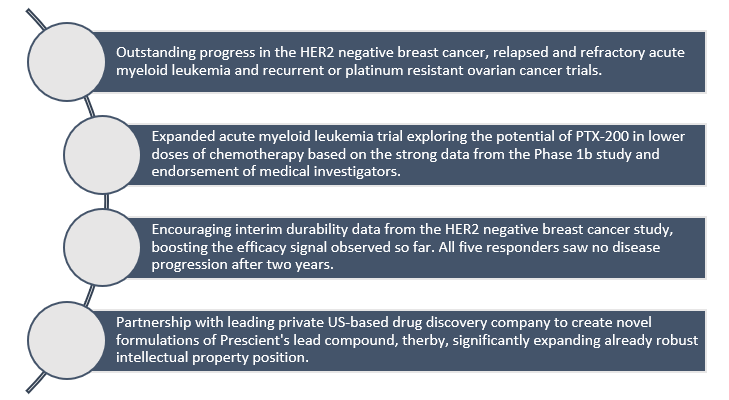 Prescient’s clinical programs are of vital importance in precision oncology. Focused on delivering clinical milestones and business development operations, Prescient remains on the right path to transform cancer treatment around the worldwide and is well-funded, paving its way to continue research and clinical development activities during next year.

It was yet another year of solid progress for Prescient, demonstrating the team’s ability to execute, and the exciting potential of its drug candidates. This sets up Prescient for an exciting 2020.

To stay updated with PTX company activities and announcements, please update your details on their investor centre.