An exploration company based in Western Australia, Pacifico Minerals Ltd (ASX: PMY) holds interests in Colombia and Australia. The company currently focuses on the development of its Sorby Hills Lead-Silver Zinc JV Project in Western Australia, in which it owns 75 per cent interest with the remaining 25 per cent held by Chinese-headquartered HYG or Henan Yuguang Gold & Lead Co. Ltd.

HYG is the silver producer and lead smelting company in China, that has been counted amongst Top 500 China manufacturing enterprises and Top 500 Chinese enterprises for the last five consecutive years.

In a recent update on the ASX, Pacifico released quarterly activities and cashflow reports for the September 2019 quarter. Let us take a look at the operational and financial highlights of the quarter below:

Pacifico’s Sorby Hills Joint Venture Project, located around 50km to the northeast of Kununurra, is well connected to the facilities at Wyndham Port via sealed roads. The project’s permitting and established infrastructure allow for fast tracked production.

In March this year, the company notified that the Pre-Feasibility Study (PFS) has estimated a capital expenditure of $95.4 million to develop the mine, with a pre-tax NPV8 of $243 million and a 16-month payback. 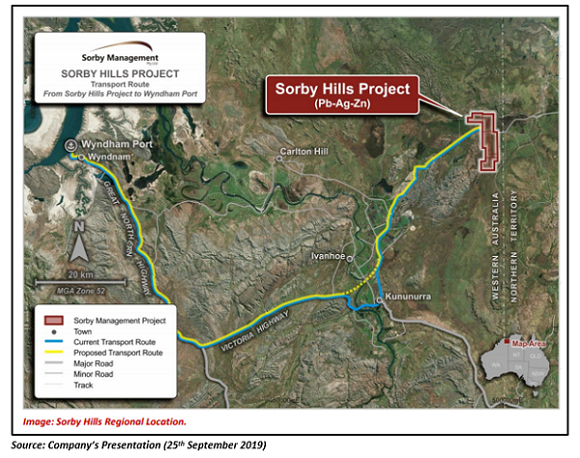 During the quarter, Pacifico notified about the following developments at its Sorby Hills Project:

Heavy Liquid Separation testwork, that was conducted to upgrade the ores, also returned remarkable results with significantly low lead losses (<10 per cent) relative to the PFS assumption. The results demonstrated:

The company undertook Phase II drilling program between May and July 2019 at Sorby Hills Project. The drilling program was focused on shallow mineralisation beyond 100m depth, that may be mineable by open pit, at CDEF and B deposits. The program consisted of 31 RC holes, eleven holes drilled with diamond tails and RC pre-collars, and 44 HQ cored diamond holes for a total of 5,959m.

Pacifico reported significant shallow drill intercepts from both CDEF and B deposits, which included:

Pacifico carried out the drilling program to increase Indicated Resources ahead of a proposed MRE update in the December quarter. The company will combine the updated MRE with progressing mining studies and metallurgical results to improve confidence and enhance Project economics ahead of the upcoming Optimised PFS.

The company’s consolidated cash balance was ~$5.1 million at 30 September 2019, with JV reimbursements of $282k likely to be received during the December 2019 quarter.

During the period, the company issued 575 million shares at a price of $0.008 per share to professional and sophisticated investors to raise $4.6 million. The company will use the proceeds from the placement to complete both the Optimised Pre-Feasibility Study and Phase III drilling program and to advance the Definitive Feasibility Study (DFS).

One can see that Pacifico has delivered remarkable performance during the September quarter, marking substantial progress at its Sorby Hills Project.