The mineralised corridor of Sorby Hills can be viewed in the figure below. 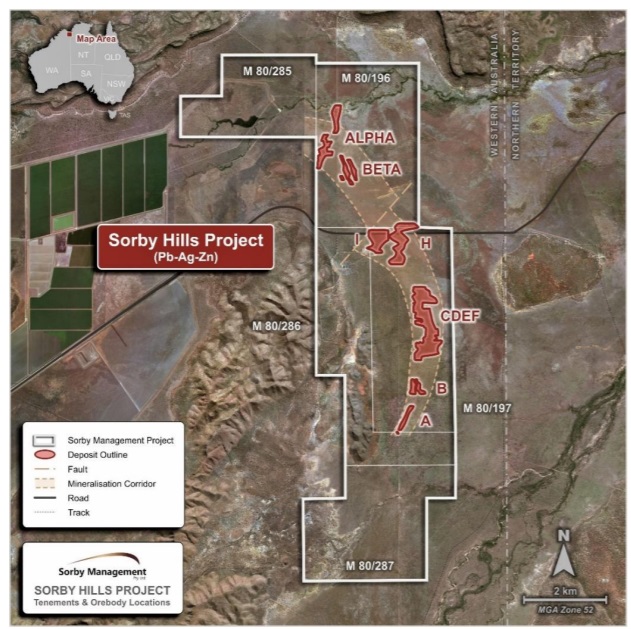 It is now expected that the results of Phase II drilling program will significantly increase Indicated Resources within the next Mineral Resource Estimate planned for September 2019 to underpin the upcoming Optimised Pre-Feasibility Study.

Notable shallow drill intercepts from both B Deposit and CDEF deposit include:

At CDEF Deposit, the logging and analyses results from the Phase II drilling campaign have returned impressive intersections which is further confirming the geological continuity of the mineralisation of the Deposit. Although the complete results have not arrived, it is believed that the Indicated Resources at the northern end of CDEF deposit will increase as a result of the infill and extensional drilling.

At B Deposit, results have demonstrated major shallow (from 10m) extensions of the Indicated Resource area which remains open to the south and north and is considered likely to link up with A Deposit.

To further expand the Indicated Resource of the B and CDEF deposits, and convert Inferred Resources at the A, H, I, Alpha and Beta deposits to Indicated Resources, the company is planning to conduct further drilling over the next year. It is expected that the deposit size at Sorby Hills will continue to grow further as extensions and along with that, other targets outside of the main defined deposits will be drilled and added to the resource base.

The company is currently progressing compilation and assessment of the current and historical drill hole information to provide a sound geological and mineralisation model on which the revised MRE will be based on. It is expected that the final assay results will be out by late August. The company expects the revised MRE to be completed in September 2019.

The drilling program was designed with the assistance of mining and geotechnical consultants, Entech Mining to convert Inferred Resources to Indicated Resources, currently at 10.9Mt of 5.0% Pb equivalent (3.9% Pb and 46g/t Ag).

Phase II drilling consisted of 30 reverse circulation (RC) holes, including ten as pre-collars to diamond drilled tails, and 45 HQ3 diamond holes for a combined total of 5,959m (inclusive of 427m mud rotary). The majority of holes were inclined at 60° and drilled towards the west (azimuth 270°).

Last month, the company had reported highly positive metallurgical testwork results which confirmed the potential for the project to produce high quality lead concentrate. In a present scenario, the use of lead is growing in industry for energy storage systems.

Lead batteries are currently providing around 75% of worldwide rechargeable energy storage and start-stop functionality for all passenger cars, including Electric Vehicles. As per International Lead and Zinc Study Group, the Global lead demand is expected to increase by 1.2% to 11.87 million tonnes in 2019, driven by increased usage in India, Japan, and the Republic of Korea. In the prevailing lead market opportunity, the highly positive metallurgical testwork results are very encouraging for the company and its shareholders.

The technical and economic robustness of the project has already been confirmed by a Prefeasibility Study which has indicated a steady state annual production of concentrate containing approximately 31.125ktpa of lead and 1.17Mozpa of silver from the project. The pre-production capital expenditure of the project is estimated to be around A$95.4 million. As per PFS, the project has a 16-month payback with pre-tax NPV8 of A$243 million. 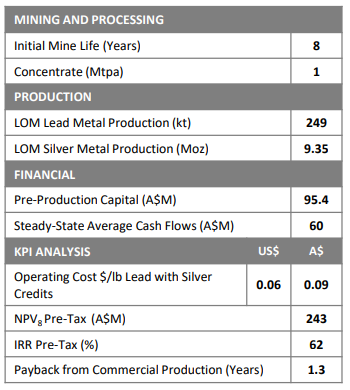 In 2019 June quarter, the company reported net cash used in operating activities of A$1.18 million which included expenditure of A$898k on exploration and evaluation activities, A$90k on staff costs and A$200k on administration and corporate costs.

The net cash used in investing activities for the June quarter was around A$2.28 million which includes A$2.26 million spent on tenements (Sorby deposit) and remaining A$17K spent on property, plant and equipment. The net cash inflow from financing activities was around A$3.8 million. The total cash outflow in the September quarter is estimated to be around $1.35 million.