Mincor Resources NL (ASX: MCR), a Perth based exploration company, announced on 23rd April 2019 that the company increased its nickel Mineral Resource at the Cassini nickel sulphide deposit in Kambalda substantially. The company implemented a drilling strategy in March 2019 quarter, which resulted in a 52% increase in contained nickel to 28,500 tonnes.

The updated Indicated and Inferred Mineral Resources now stands at 780k tonnes with a grade of 3.7% of nickel. Mincor mentioned that the 780k tonnes of nickel represents an increase of 9,800 tonnes of high-grade nickel, as compared to the maiden Mineral Resource previously announced by the company in August 2018. Mincor recently entered a term sheet agreement with BHP and affirmed that Cassini is one of the most substantial, and highest-grade nickel resources in the Kambalda district, and the deposit will continue to emerge as a critical pillar in the company’s integrated nickel restart strategy in the Kambalda district.

Mincor encountered an intersection of 7.17m @ 11.49% Ni in the drill hole identified as MDD314 previously. Following the intersection, the company obtained five down-plunge intersections, which allowed Mincor to upgrade the existing mineral resources of the company. As per the company, the drilling with at least two diamond drill rigs at Cassini will continue, till the June quarter of the year 2019, with an aim to further enhance the Mineral Resource.

Geology of the Cassini Deposit:

The Cassini nickel deposit is at the southern end of the Widgiemooltha Dome, which lies in the southern part of the Archaean Norseman-Wiluna Greenstone belt. The deposit area is a sequence of sands and muds, which is linked to lake systems in the north.

The mineral resources at other prospects are as: (As per JORC Code 2012 Edition) 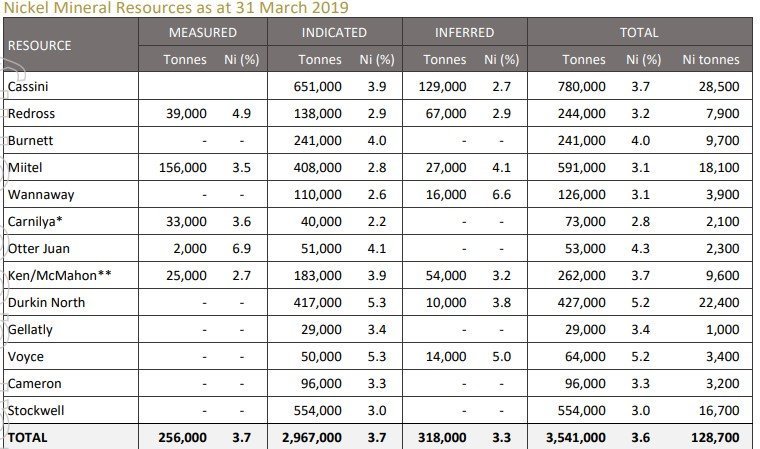