In 2019, Lithium Australia successfully converted waste rock, sourced from a mine-site located close to Kalgoorlie in Western Australia, into a lithium chemical at its SiLeach® Gen-2 pilot plant at the ANSTO Minerals facility in Lucas Heights, New South Wales, marking a milestone for the Company and also a world first. Subsequently, the chemical was transported to the Company’s VSPC Ltd facility (100%-owned) to manufacture a test lithium-ion battery (LIB), which performed well, comparable to those created using battery-grade lithium carbonate.

The Company, in the longer-term, aims to procure a reliable and regular supply of lithium chemicals as global commitments to date, it is estimated that ~3.5 million tonnes of lithium carbonate equivalent (LCE) will be needed on a yearly basis to power the number of electric vehicles required to meet the legislative requirements in place from 2030. With current global lithium production at 300,000 tonnes of LCE per annum and the demand for the product growing at 15% annually, there is a great market opportunity for the Company.

Evidently, the Company is well advancing its goal of vertical integration as it continues to capitalise on all major sectors of the lithium supply chain. It is strategy summarised in the diagram below- 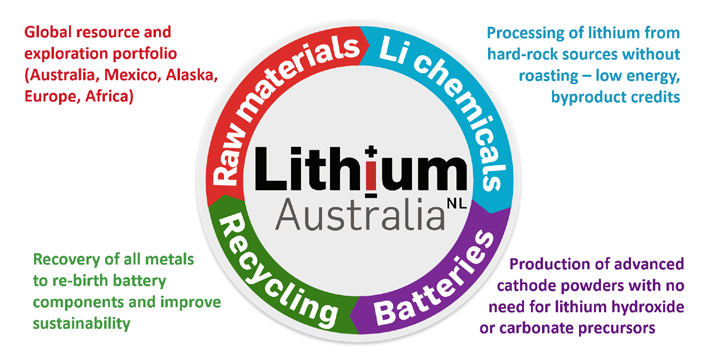 The Company’s key activities during the Calendar Year 2019 included-