Jupiter Mines Limited (ASX: JMS) is primarily involved in the operation of the Tshipi Manganese Mine in South Africa and the sale of manganese ore. Tshipi Borwa in South Africa, of which Jupiter owns 49.9%, is one of the largest, longest-life and lowest-cost manganese exporters globally.

Following the release of this news, the share price of the company increased by 2.059% during the intraday trade.

Tshipi’s development commenced in 2011, with first production in 2012. Today it is one of the world’s pre-eminent manganese exporters. Tshipi produced near 3.5 Mn tonnes for FY 2019 with around 3,114,536 BCM mined in the fourth quarter.

Jupiter’s interest in Tshipi is held through its wholly owned subsidiary Jupiter Kalahari S.A., as shown in the diagram below - 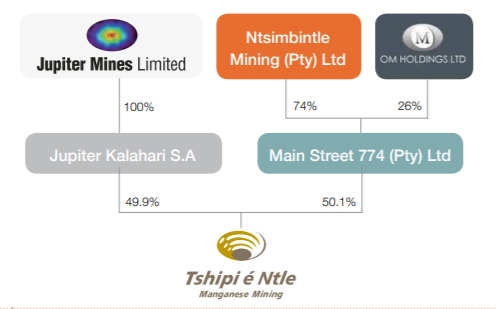 The company’s business model depends on the Tshipi Mine being able to continue production and transport the manganese ore product efficiently to market for a viable sales price.

The company recently reported that it has commissioned an independent valuation of its Central Yilgarn Iron Ore assets and also launched a process to review its strategic options with regards to these projects.

The assets, comprising the Mount Mason DSO Hematite and Mount Ida Magnetite projects, hold great value to the company. Further, the advanced nature of these projects, their proximity to established and available infrastructure (road, rail and port), the size and quality of the mineral resources and ease of mining and ore extraction is providing an attractive opportunity to commence high-grade DSO hematite production and high-grade magnetite concentrate production that could underpin quality long-term supply. At the end of FY19, the company had current assets of around $158 million and current liabilities of around $132.9 million.