Earlier Today, Corazon Mining Limited (ASX:CZN), a focussed explorer of two quality projects including the Mt Gilmore Project and the Lynn Lake Ni-Cu-Co Mining Centre, announced the additional assay results including the previously reported assay results for all priority diamond drilling samples from its drilling program that ended in December. 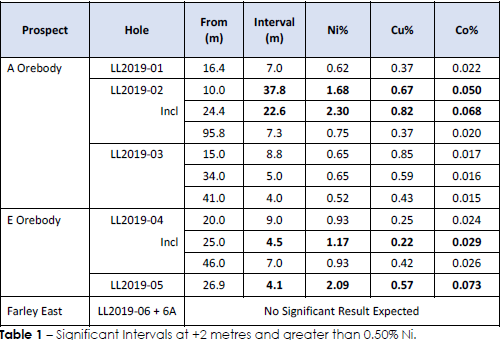 A Orebody – The area covered the historically mined A orebody and the processing plant from the previous operations. The orebody produced 4.8 Million tonnes ore at 1.07% Nickel and 0.55% Copper while in operation between 1953 and 1965. The A orebody includes Sulphide mineralisation within a subcircular, subvertical, mafic to ultramafic igneous intrusive pipes.

Hole LL2019-03- Good zones of marginal-grade including three zones with intervals of 4 to 9 metres downhole and grades of between 0.50% and 0.65% nickel. The mineralisation is expected to be disseminated with grades increasing closer to the stopped area.

E Orebody – Area covers the previously mined underground which operated between 1957 and 1963, with production estimates of about 930,000 tonnes at 1.06% nickel and 0.48% copper (cobalt not reported). 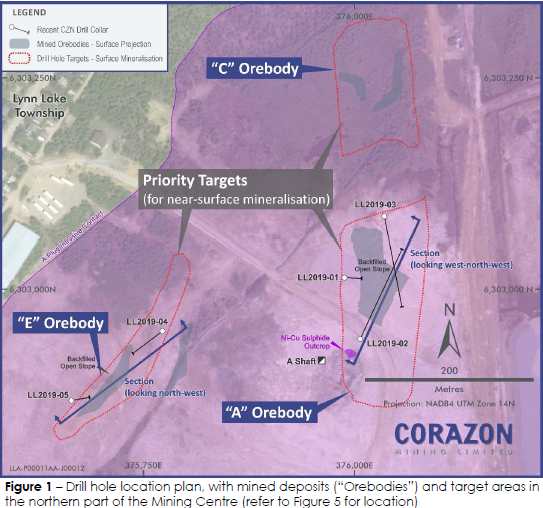 The orebodies, A & E have the potential to expand the mineral resources and have never been explored using modern drilling techniques. Other areas around the previously mined regions also possess the potential for significant resources and may be included in the future drilling programs.

The drilling for LL2019-06 was abandoned due to poor drilling conditions. The Hole LL2019-06A was the re-drill of hole LL2019-06. The diamond drilling core samples have been sent to the Perth based lab for analysis. 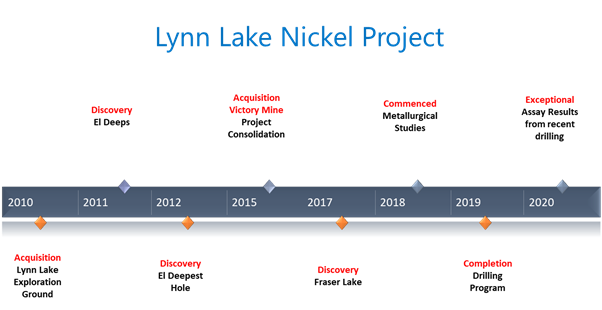 The recent drilling program focussed on the shallow mineralisation from the historically mined zones. The near-surface tonnages would enable the mining operation to start quickly with minimal stripping cost, CZN would focus on such assets to be defined during the feasibility studies.

Other Region with potential shallow mineralisation would be included in the future drilling programs, along with continued work on the A and E Orebody prospects. The drill targets for the Fraser Lake complex is expected to be identified during the ongoing exploration program.

The metallurgical results gave out exceptional results with separate high-value Nickel/Cobalt, and Copper concentrates. The test results came out with excellent product specifications-

Strong demand for Nickel Sulphide product can be anticipated in the upcoming years, and Corazon intends to prioritise the development of Lynn Lake to develop the right commodities at the right time in the first world developed mining neighbourhoods.