Advanced Braking Technology Ltd (ASX: ABV) has an engagement in the commercialisation, research and development and manufacturing of the Failsafe and Terra Dura® brakes and associated braking systems. Today, on June 21, 2019, Advanced Braking announced that is has received an order for its Failsafe brakes from a blue-chip customer (Lendlease Samsung Bouygues Joint Venture) within the civil construction industry. With this order, ABV achieves a strategic objective to diversify its customer base. The value of this order has been estimated at around $160,000, which is expected to be supplemented by the ongoing supply of spares and consumables. ABV is excited about this order, as this is an initial order from the Joint Venture, and the company expects that the entire Toyota Landcruiser fleet of around 30 vehicles will be fitted with Failsafe brakes over the coming months. Additionally, the company is in dialogue with the other construction companies, which have a presence in the tunnelling projects in Victoria and New South Wales.

Mr John Annand, Chief Executive Officer of Advanced Braking, stated that the management is excited about this contract and is looking forward to work with the Lendlease Samsung Bouygues Joint Venture to provide a safety solution to protect the employees and improve the workability of the equipment.

Mr Annand further stated that the company is pleased to know that its products are getting recognition outside the mining industry, and this contract would provide an opportunity to diversify its products as per the industry needs along with addressing best safety concerns.

Post quarter, the company entered into R&D prepayment loan facility with R&D Capital Partners Pty Ltd., which has a limit of $620K. The first tranche of this amount ($420K) was drawn by the company, and the remaining amount will be a drawdown in case of any further requirement. This loan facility will be repaid upon receipts of the R&D claim for the year 2019, under the R&D tax incentive from the ATO. During the quarter, around $265K of matured convertible notes (matured on December 23, 2018) were repaid to note holders. Additionally, new convertibles notes of around $234K were issued on January 15, 2019.

During the quarter, the company observed solid performance from its core products, which is the fourth generation of its proven Failsafe brake range. The March ‘19 year-to-date product sales worth $4.8 million are within 90% of the prior year results for the same period of $5.3 million. It is anticipated that the sale of Failsafe will be solid in the June ‘19 quarter. The company saved approximately $800K on an annualised basis from its cost saving initiatives in the March ‘19 quarter. The company was able to reduce cash deficit to $667K in the March ‘19 quarter from $838K in the December ‘18 quarter. The reduced corporate overhead along with a new sales strategy to increase the sales in the short to medium term will help the company to show a cash neutral position in the June ‘19 quarter or at the earliest.

ABV is encouraged by its business development processes, where it is being now approached by several diverse companies from various industries seeking assistance for the development of innovative braking solutions, both in Australia and globally. The company also informed the market that its Failsafe product is being used on the Voltra eCruiser which is a 100% electric drive Landcruiser 79 series currently being trialled at the BHP’s Olympic Dam. The vehicles utilised in the project are fitted with all the mine specification equipment along with ABV’s Failsafe brakes. ABV is expected to provide benefits in term of zero harmful emissions underground with increased fleet availability and a saving on maintenance and operational costs. Moreover, the product has been addressed by BHP as a part of the solution for both the environmental and safety concerns along with the assistance in reducing operational and maintenance costs of the Voltra eCruiser.

In another development for the period, two Failsafe Emergency driveline brake kits were fitted in Mongolia to Mercedes Benz Actros, which is a new truck application. The truck will be utilised underground at the Oyu Tolgoi copper and gold mine, which has a production potential sustained for many decades. This mine is being operated by Rio Tinto. 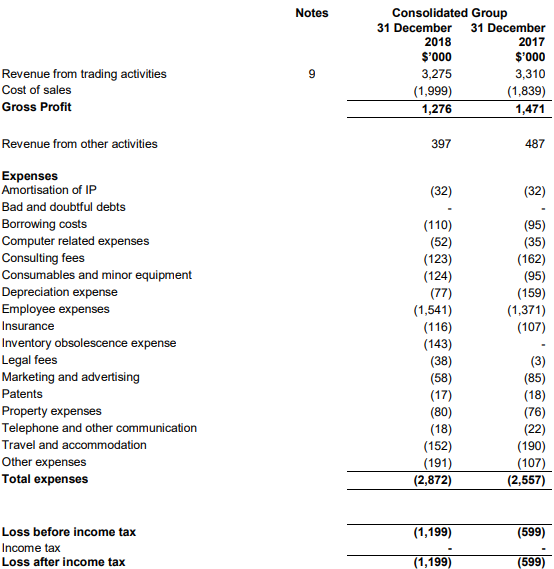 Outlook: ABV is being approached by several companies both from the domestic and global market for its braking technology solutions. In order to increase business efficiency and save costs, the company is working on several initiatives along with the reduction of staff. It recently made a decision to close its Melbourne corporate office, which will help the company in saving additional costs and the positive impact is expected to be seen from 3Q of FY2019. It is expected that around $0.8 million of the cost could be saved on an annualised basis, where employee expenses and property expenses are estimated at $790,000 and $23,000.

On May 21, 2019, Advanced Braking informed the market that it has received $12K worth order from Cleanaway Pty Ltd.