Incorporated on 15 March 2016 and led by a team of career mining experts, BlackEarth Minerals NL (ASX: BEM) is a metals & mining sector player, focussed on identifying and assessing projects as well as assets related to graphite resources across Australia as well as international markets.

BEM became a public listed company in the year 2018, and since then its focus has been on boosting shareholdersâ value. All the projects of BlackEarth Minerals are targeted towards high-value graphite assets, as the companyâs strategy revolves around flake graphite, which is an important component in lithium-ion batteries and fire-retardant materials. The company intends to emerge out as a top supplier of graphite across the globe in the coming years, seeking to take advantage of strong global demand for graphite anticipated over the next 10-15 years.

The mineral exploration and development company is currently engaged in several projects in Madagascar and Western Australia, including Maniry and Ianapera (Madagascar) and Donnelly River, Greenhills and Northern Gully (Western Australia). In this article, we will discuss BEMâs flagship project, Maniry, in which the company owns a 100 per cent stake. Results of the current project study have demonstrated that Maniry is âa robust and financially attractive graphite project by global standards.â

The project, covering an area of around 143 sq km, is located in the southern region of Madagascar, which is a major graphite supplier and caters to consumers in countries like the United States, India and China. According to previous systematic exploration activities, the project is believed to host a large-scale graphite mineralised system. Moreover, the previous exploration has defined a minimum of 34 large-scale zones of prominently outcropping graphite mineralisation spread over an area of 6.5 km by 2.5 km. With the preliminary work on most of the defined targets being accomplished, the company considers the Maniry project to be at an advanced stage of development.

The project contains the Razafy Resource, which is predominantly located on the mining lease, PE/5394. The mining lease is scheduled to expire on 19 November 2042, as it has a lease period of 40 years, with an option to extend. Owing to this mining lease, the company has a LOM of more than eight years just on resources that are located on its granted mining licences and more than 20 years on total resources at the project. Additionally, petrological and metallurgical analysis of selected samples has been concluded earlier, confirming the high quality of graphite at the project.

According to earlier exploration activities, the Razafy prospect is believed to be open within the existing mining lease to the north west and potentially through lens repetition to the east.

In a company announcement on 14 August 2018, the company announced an updated maiden JORC compliant mineral resource estimation for the Razafy graphite deposit, unveiling an Indicated and Inferred Resource of 11.2Mt @ 7.10% total graphitic carbon.

The project has been split into three regional domains of graphite mineralisation. In the Razafy Domain, exploration target, including the existing drilled and estimated Razafy Mineral Resource, is 85-125Mt with grades ranging 7%-8% TGC. The other two regional domains of graphite mineralisation apart from the Razafy Domain are Ivan Domain and Haja Domain. For Ivan Domain, the exploration target is 35-75Mt with grade ranging 6-7% TGC, while for Haja Domain, the Exploration Target, which includes the currently estimated Haja lens, is 140-180Mt with grade ranging 6-7% TGC. 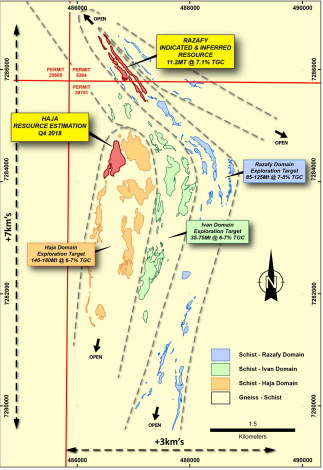 During the year 2018, the company undertook several activities on the project. Major activities and the time period of these activities have been tabulated below:

In January 2019, the company announced positive results from a scoping study completed by BatteryLimits in Perth into the project, estimating start-up capital for the first phase of the project at a low USD 41 million and a 10-year project life on the basis of Indicated Resources only. The financial analysis suggests that the project could yield good returns with minimal capex requirements. Below table details the highlights from the study. 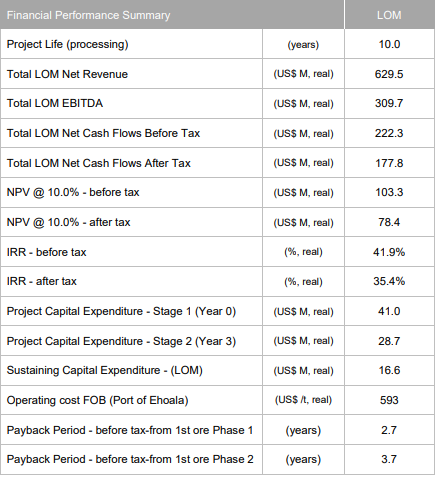 Based on trenching programs at the Maniry graphite project, the company unveiled exceptional assay results from Trench MNT041 and MNT041a, excavated at the Razafy NW prospect. Highlights include:

According to the company, with drilling, these significant along strike trench results, primarily in the north of the current resource holds the potential of conversion into a significant resource. It is expected to make additions to the existing mineral inventory of the company with high-grade resource tonnes. Moreover, this would boost the economics of the initial stages of a mining operation. Within the Razafy domain, the northern strike remains the primary focus of more systematic exploration efforts for the company, as of now. 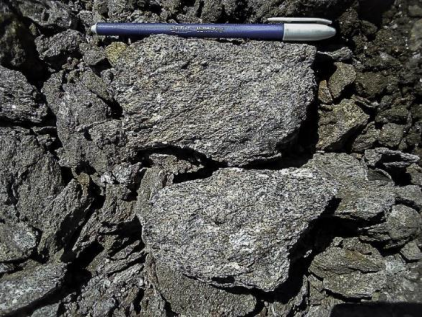 Owing to the available information as of now, the Maniry project highlights an exploration target in the range of 260Mt to 380Mt at a grade ranging of 6-8% Total Graphitic Carbon (TGC) including the currently estimated mineral resource.

For the Maniry project, the company secured full support from the Madagascan Department of Mines during its discussions with Minister of Mines and Strategic Resources, Mr Fidiniavo Ravokatra in the month of June 2019. Mr Ravokatraâs support highlights the strategic value that the project is believed to hold in one of the poorest parts of the African country. Additionally, the company held positive preliminary offtake discussions with major end-users in China.

Another major development with respect to the project was announced by BEM on 12 August 2019. The company unveiled that testing on concentrate has confirmed its consistency with specifications required by lithium-ion anode material producers. The test work was designed to target the optimised conditions for the manufacture of a spherical graphite product from a flake graphite flotation concentrate, targeted towards its use in the battery industry.

The testing, conducted by Dorfner ANZAPLAN, demonstrated spherical graphite production yields of up to 52%, which was up from the industry average of 40%. Dorfner is progressing with the purification of spherical graphite involving the chemical, thermal and microwave assisted acid digestion processes, while production of pouch cells as well as electrochemical characterisation work is scheduled to start after the completion of the purification process. More on the current testing can be read here.

BEM intends to complete a feasibility study of its flagship project in 2020 and expects project commissioning in 2021. The company intends to target surging graphite demand in China, as it is projected to annually need 40 million tonnes of fire-retardant building materials and 5% of this product being made of (expandable) graphite.