The Company has its chief projects located in the State of Rio Grande do Sul, which is a major farming area and completely depends on the imports of phosphate. The location of its projects and operations is a lucrative opportunity for the company as Brazil is globally the fastest growing fertiliser market and third-largest agriculture exporter.

Although Brazil is considered as an agricultural powerhouse across the globe, yet it is totally dependent on imports of fertilisers. The opportunity arising from the right commodity and large domestic market is expected to deliver significant growth for Aguia Resources through crucial land holdings in the globally recognised areas of Southern Brazil.

Let us get acquainted with the assets of AGR that have been classified as below:

The Rio Grande Deposits comprise of the

Besides being situated in a farming region around 350 km from the State Capital Porto Alegre, AGR has the added advantage of a well-serviced region with roads, rail, port, and power. The Company has made significant progress at Três Estradas with current preparations for obtaining installation license for the construction of the project.

Recently, the Company provided a timeline consisting of several key milestones to be covered at Três Estradas Phosphate Project. 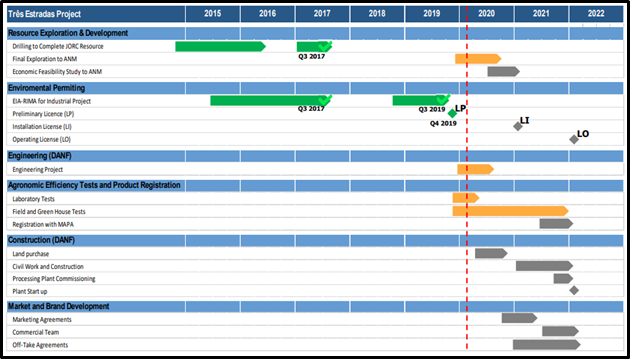 Aguia looks forward to focussing on ongoing exploration including sampling, trenching, geophysics, and drilling at Canhada, Big Ranch, Primavera, Andrade, Carlotta, Seival Passo Feia and Lagoa Parada for the Rio Grande copper projects, while the key focus of drilling is expected to remain at Andrade with the target of expanding the existing Mineral Resource.

Comprising of 43 permits and applications for 247.4km2 in the state of Paraiba north-eastern Brazil, the Lucena Phosphate Project has inferred mineral resource estimated to be 55Mt grading 6.42% P2O5. Further, exploration of neighbouring properties has been continued with an aim to identify additional oxidised carbonatite sources that could ultimately contribute to the Tr?s Estradas project.

Lucena is now being considered as a potential direct application natural fertiliser project (DANF), and it is intended that analysis and trial mining be assessed as production pathways.

Let us now get acquainted with AGR’s management team that is currently leading the Company:

Being a long-standing Technical Director, Fernando Tallarico was appointed as the Managing Director of the company on 11 October 2019. Fernando Tallarico has been engaged with AGR since inception and is a Ph D. having 30-years geologist experience in South America.

Fernando Tallarico is responsible for the acquisition of AGR’s highly prospective phosphate and copper portfolio in Brazil.

Appointed on 11 June 2019 with more than 30 years of experience as a commercial lawyer, Christina McGrath has held various senior executive management positions such as Company Secretary.

She specialises in Corporations Law, Board & Audit Committee Advisory, and Corporate Governance while holding domestic and international experience.

His more than 35-years of experience in Banking and Advisory services was gained through one of the major banks in Australia. In 2008, Martin McConnell was placed in the role of a Director at an independent advisory firm of Grant Samuel for advising on property and finance related operations and later in 2011 to till date, he joined as the head of financial risk products at Assetinsure.

Stephen Ross is a geologist and has more than 25-years of experience in technical, business development and corporate positions through being a director at an ASX-listed company engaged in the international minerals industry.

The following members are included in the team of Company’s general managers.

Besides being a senior Geologist, Lucas Gilinari has been a key part of the Aguia exploration team for over eight years. While being based in Cacapava do Sul, Luca Galinari has been overseeing both copper and phosphate/gold exploration.

Luiz, holding mining industry experience of more than sixteen years, is a senior geologist encompassing exploration, development, and mining. Luiz Clerot has recent and extensive local experience in fertilizer project development experience and is well placed to lead the development of the TEPP and Mata Grande projects.

Being a postgraduate in finance and business management, Marina Carvalho has over a decade experience of coordinating finance, accounting, budgeting, corporate governance, HR and IT departments for small mining companies and has recently moved from part-time to full-time role with AGR.

Being an M.Sc., Thiago Bonas has 18-years geologist specializing in resource evaluation and audit in South America, Canada and Europe and is a sitting member of the CBRR (Brazilian Commission for Resources and Reserves).

Viewing through the lens of the quality of exploration ground and the results of work to date; AGR believes there is a good opportunity for exploration success at all projects.

The shares of AGR are placed in a trading halt due to the release of an announcement related to capital raising. The securities shall remain in halt until the earlier of the commencement of trading day on 20 April 2020 or post the release of the announcement to the market.

CLICK HERE FOR YOUR FREE REPORT!
Tags:
ASX:AGR phosphate
All pictures are copyright to their respective owner(s).Kalkinemedia.com does not claim ownership of any of the pictures displayed on this website unless stated otherwise. Some of the images used on this website are taken from the web and are believed to be in public domain. We have used reasonable efforts to accredit the source (public domain/CC0 status) to where it was found and indicated it below the image.