A Year in Review for Aguia Resources, Major Developments at Phosphate and Copper Assets

ASX-listed fertiliser company, Aguia Resources Limited (ASX:AGR) with phosphate assets and copper exploration portfolio located predominately in Southern Brazil, has had a fairly significant year till date. The Company has been focused on developing and growing its assets, both phosphate as well as copper, and has made significant progress during the last year.

Let us look at the major developments of Aguia Resources Limited in the last year.

It was around a year ago in June 2019 when the Company was awaiting the granting of the Preliminary License (LP), and the exploration team of AGR has had additional success across its copper tenements and developed a large tenement position in a Copper Province with signs of copper at 6 locations.

The Company and the team were excited about the progress across the copper exploration program and considered the Rio Grande to be an important copper belt in Brazil with huge potential. Moreover, the Company had been engaged in advancing its Três Estradas phosphate asset located in the state of Rio Grande do Sul.

Further in September 2019, the Company shared its intentions to advanced exploration, including drilling aimed at adding to the Mineral Resource at the Andrade Copper Project and commencement of a geophysics program (designed to help optimise drill hole locations and rank the copper targets) to extend across its copper targets starting with possible extensions to Andrade and the nearby Primavera target.

In addition to this, the intensified mapping and surface sampling had led to significant discoveries at several targets at its recently discovered copper/silver as well as gold targets in the region. The results included the following:

The endless efforts of AGR toward obtaining the LP, finally paid off in October 2019 when the Company was granted the LP for the development of the Três Estrades Phosphate Project after approval of the Environmental Impact Assessment (EIA) by the Rio Grande do Sul State Environmental Agency (FEPAM).

The Company completed a key milestone in the mine permitting and development process for the Três Estrades Phosphate Project by receiving what is called as “the most challenging mine permit milestone to obtain” and represents a substantial de-risking in the path to construction and production.

Subsequent to this, the Company also shared its intentions to engage in obtaining the Installation license (LI) that shall allow the necessary authorisation to initiate construction and start developing the mine site. Moreover, the Company had already initiated the LI process by investigating various options of mines and processing sites, including examining different flow sheet scenarios.

By mid-November 2019, AGR had initiated a detailed geophysics program of ground-based Induced Polarisation in preparation for targeted drilling across the western copper targets of Andrade and the nearby Primavera target and shared its intentions to commence drilling at these targets towards the end of the December 2019 Quarter.

The drilling that was aimed at adding to the Mineral Resource at Andrade Copper Project and first-pass drilling at Primavera and AGR had intensified the mapping, surface sampling and trenching over its recently developed copper-gold targets at Carlota and Passo Feia and reported the following results:

The Geophysics Program validated the geophysical signature for copper deposits along with the Andrade and Primavera trend and indicated a possible copper extension to both the north and south of the existing targets. Up receiving such significant results, AGR was eager to commence a drilling program the second week of January 2020 at the generated targets that confirmed the geophysical signatures for copper deposits. 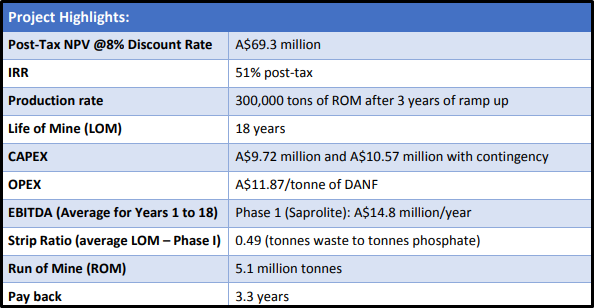 The scoping study indicated the positive economics of the project and the simple, low-cost mining and processing required to support the production during its first phase was based on the environmentally friendly Direct Application Natural Fertilizer (DANF) production process.

During March 2020, AGR reported positive results of the initial agronomic laboratory tests conducted on the DANF for its Três Estradas Phosphate Project, where results surpassed expectations and were well within the required specifications to produce a Natural Phosphate Product with excellent solubility results indicating a total P2O5 solubility of 22.9% in a 2% citric acid solution.

Letter Of Support From BRDE

In the next month, AGR further gained another breakthrough where it was given a letter of support for a development loan to fund up to 50% of the capital expenditure for the Três Estradas Phosphate Project from the Development Bank of Southern Brazil (Banco Regional de Desenvolvimento do Extremo Sul) (BRDE).

Details at: Aguia Resources Receives Up To 50% Funding Letter on CapEx for Três Estradas Phosphate Project

Recently, the Company had proposed to issue