RBA has kept the cash rate unchanged in September at 1 per cent, after assessing developments in both the domestic and international economies in Monetary Policy Meeting of the Reserve Bank Board.

Although the escalation of the US-China trade dispute has intensified the downside risks to the global outlook, the Australian businesses do not appear to have been affected to the same extent as businesses in other advanced economies.

Australia is counted amongst one of the robust economies of the world that has observed an uninterrupted expansion in the last 28 years. The country?s attractive record of steady growth shows its reliability as a safe and low-risk environment for the business.

Australia?s resilient economic position is backed by the Reserve Bank of Australia (RBA), that ensures financial system stability and promotes efficacy and safety of the payments system. The central bank has followed a practice of creating balance in the Australian economy against major domestic and global risks. 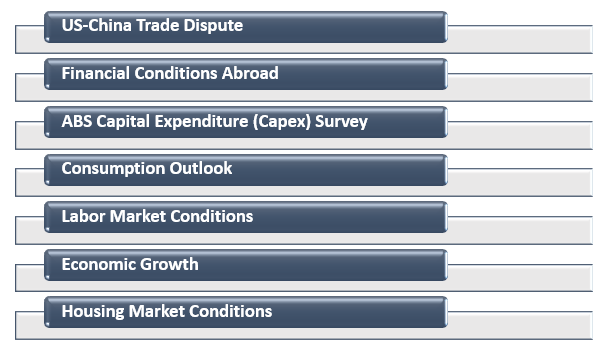 On the global front, RBA?s decision was partially influenced by ongoing trade tension between the US and China. As per the central bank, the US exports to China had reduced by about 20 per cent over the year to June, and China exports to the US had been approximately 3 per cent less due to intensifying tensions between the two nations.

However, it is to be noted that Australia?s businesses were not so affected by the weak trade environment as the country?s exports are more exposed to domestic demand in China and less integrated in global supply chains.

The bank noted that subdued inflation, along with persistent downside risks to the global economy induced several central banks to lower interest rates in recent months.

As per RBA, a number of central banks in other advanced economies are either preparing or have already eased their monetary policy to sustain the economic expansion.?

As per the latest ABS release, the total new capital expenditure dropped by 0.5 per cent in the June quarter, while expenditure on mining improved by 1.7 per cent in seasonally adjusted terms.

RBA expects the investment intentions to remain encouraging for the mining sector, while moderately softer for the non-mining sector in 2019/20.

The central bank expected low- and middle-income tax offset (LMITO) to improve household income in the coming quarters, however, on checking with the retailers it was observed that this had yet to lift spending noticeably.

Although the unemployment rate in Australia stood at 5.2 per cent in July, the employment growth remained strong predominantly in full-time work.

Although there was strong employment growth, the wage growth remained low in Australia, and the increasing trend in wage growth seemed to have stalled.

Over the year to the June quarter, the wage price index rose by 2.3 per cent with wages growth in private sector remaining steady in the quarter. The bank mentioned that Australian economy demonstrated few indications of developing wage pressures during June 2019 quarter.

The current scenario of Australia suggested that the country?s economy still has some spare capacity left in the labour market and could sustain lower rates of underemployment and unemployment.

The Australian economy experienced a GDP growth of 0.5?per?cent in June 2019 quarter, driven by exports.

RBA expects the GDP growth to improve further, supported by the recent tax cuts, low level of interest rates, a brighter outlook for the resources sector and amid signs of equilibrium in some established housing markets.

As per the bank, the noticeable rise in Sydney and Melbourne housing prices in August and a further increase in auction clearance rates indicate that . ABS labour force data in Australia in recent months.

However, although the housing prices improved in August, the June quarter?s property prices were not so favourable.

Recently, ABS has released the Residential Property Price Indexes for June 2019 quarter that indicated a fall in property prices by 0.7 per cent during the period. Sydney and Melbourne led the decline in housing prices during the quarter, falling by 0.5 per cent and 0.8 per cent, respectively. All the eight capital cities of Australia observed a fall except Canberra and Hobart that witnessed a rise of 0.2 per cent and 0.5 per cent rise in housing prices, respectively.

According to ABS Chief Economist, the falls in residential property prices in Sydney and Melbourne during June quarter were moderate due to an improvement in several housing market indicators like auction volumes and clearance rates.?

Recently, ABS also released the dwelling approval figures for July 2019 that highlighted a fall in dwelling approvals by 9.7 per cent. The fall was led by falls in New South Wales (17.5 per cent) and Victoria (24.3 per cent). Increases in total dwellings approved were logged in Tasmania, Queensland, South Australia and Western Australia. Private dwellings excluding houses declined by 18.4 per cent, whilst private house approvals fell by 3.3 per cent.

Although the housing market scenario for June quarter was not so promising, the Australian property market has started showing some signs of revival. The property market has always remained an important concern for RBA, and it was one of the key factors for the bank to reduce the interest rates to 1 per cent.

As per RBA, Australia is likely to see an extended period of low interest rates to reach closer to the inflation target and make persistent progress towards full employment. Amidst the current situation of the economy, the market analysts are further expecting another 25 basis points rate cut in Australia by November 2019.

This website is a service of Kalkine Media Pty. Ltd. A.C.N. 629 651 672. The website has been prepared for informational purposes only and is not intended to be used as a complete source of information on any particular company. Kalkine Media does not in any way endorse or recommend individuals, products or services that may be discussed on this site. Our publications are NOT a solicitation or recommendation to buy, sell or hold. We are neither licensed nor qualified to provide investment advice.?