Amid the shaky global scenario due to escalating US-China trade conflict, the Australian economy saw a stronger than expected trade surplus of $8,036 million in June 2019 in seasonally adjusted terms. This was the country?s first ever current account surplus witnessed since the 1970s. The surging shipments of LNG and rising iron ore prices have majorly contributed to this record trade surplus. The price of the iron ore jumped by more than 70 per cent this year, increasing from around USD 70/t at the beginning of 2019 to USD 120/t by July.

In the August meeting on monetary policy decision, RBA kept the interest rates steady at 1 per cent. Previously, the RBA slashed its interest rates twice to support employment growth and achieve the inflation target. The RBA Governor also mentioned that Australia will experience an extended period of low interest rates for reducing unemployment and help inflation reach the target.

The robust trade surplus data for June 2019 was released by the Australian Bureau of Statistics (ABS) in an update on 6th August 2019. As per the data, the exports of goods and services increased by 1 per cent or $576 million to $42,378 million while imports of goods and services fell 4 per cent or $1,287 million to $34,342 million in June in seasonally adjusted terms. The ABS release highlighted that Australia?s trade surplus has strengthened from $7.6 billion recorded in 2017-18 to $49.9 billion in 2018-19.

The major component contributing to the rise in exports was the exports of non-rural goods that improved by 1 per cent or $409 million to $28,097 million. Within non-rural goods, metals (up 21 per cent), metal ores and minerals (up 5 per cent), and coal, coke and briquettes (up 4 per cent) were the key supportive factors.

On the other hand, a fall of 9 per cent in the import of capital goods to $6,289 million, affected the imports of goods and services majorly in June 2019. Within capital goods, industrial transport equipment (down by 18 per cent), and Civil aircraft and confidentialised items (down by 46 per cent) drove the decline of capital goods? imports. 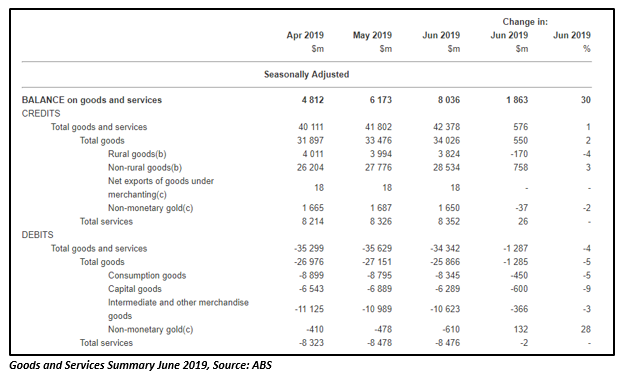 Between May and June 2019, the largest movements in exports on an international merchandise trade basis were recorded for hard coking coal (up by 19 per cent), semi-soft coal (up by 17 per cent), iron ore lump (up by 8 per cent) and iron ore fines (up by 3 per cent).

Imports and exports of goods and services are among the significant components that are used to ascertain the GDP growth of a country. The recent trade surplus figures announced by the ABS were far above the market forecast of $6 billion. The figures indicate that the country is funding more of its own investment and consumption while relying less on foreign savings.

It can also be seen that the Australian exports and imports were not much affected by the ongoing US-China trade dispute despite both China and the US being Australia?s major trading partners.

Let us try to understand the health of the Australian economy through some recently announced data by the ABS on different macroeconomic indicators:

On one side, Australia?s June trade surplus has provided a glimmer of hope while on the other side, the building approvals data for June 2019 signalled bleak domestic outlook. The recently released building approvals statistics by the ABS showed that the housing approvals have dropped by more than 20 per cent from June 2018 to June 2019.

The seasonally adjusted unemployment rate and the participation rate?remained steady in June 2019 at 5.2 per cent and 66.0 per cent, respectively. The number of persons employed during June 2019 rose by less than 1,000 persons only. The Reserve Bank of Australia (RBA) expects the unemployment rate to drop to around 5 per cent over the next couple of years.

The state of an economy depends on multiple factors with each factor playing a unique role. Australia has a history of surviving strongly during the periods of economic shocks. Currently, the economy is going through a tough phase with subdued inflation and high unemployment rate. However, one can also observe few signs of recovery in the Australian economy that are providing an optimistic economic outlook.?

The retail turnover increased by 0.4% in June 2019 against a rise of 0.1% reported in May 2019. The retail sales figure surpassed the market forecast of 0.3 per cent rise in the turnover.? According to the market experts, RBA?s interest rate cut move, election of the coalition government and recent mortgage rate cuts have contributed to the growth of retail sales.

Surprisingly, the headline consumer price index also outperformed the analysts? expectations in June 2019 quarter, rising by 0.6 per cent. Although inflation improved during the quarter, but it was still beyond the central bank?s target range of 2-3 per cent. The June quarter inflation figures eased pressure mounting on the RBA for reducing the interest rates immediately.

There is no doubt that the central bank and the Australian government are trying their best to prevent the economy from the economic downturn. However, the extent to which the government and the bank will succeed in stabilising the economy is still uncertain.