The demand for semiconductors has witnessed an upsurge recently. Meanwhile, most of the sectors, ranging from technology to the automotive industry, now needs semiconductor chips for their businesses.

However, the pace of the overall technology sector in 2021 has largely been subdued due to several macroeconomic factors. The decades-high inflation coupled with the Fed's aggressive tightening of its monetary policy had an impact on the overall market. In addition, the economy also seems to have cooled in recent months, raising concerns over a potential recession.

According to government data, the US economy shrank for the first two quarters of the year. In the second quarter, US GDP fell 0.9 per cent in Q2 2022 after slipping 1.6 per cent in the first quarter.

After Covid-19 disrupted the global supply chain, followed by increasing demand for semiconductors, the sector is witnessing a major supply crunch.

Let's take a look at the stock performance of the semiconductor companies with Kalkine Media® along with their financial performances.

NVIDIA is a leading semiconductor firm that had a current yield of 0.08 per cent. The US$ 448.42 billion company had an annualized dividend of US$ 0.16.

In the preliminary financial results for the second quarter of fiscal 2023, the Santa Clara, California-based firm posted a revenue of US$ 6.70 billion, less than its guidance of US$ 8.10 billion. The company said that due to "weaker Gaming revenue", its revenue fell short of expectations.

According to the preliminary report, the firm's gaming revenue was US$ 2.04 billion in Q2 FY23, representing a slump of 44 per cent and 33 per cent from the same quarter of the prior year. Its management is expected to deliberate on its financial results for the second quarter of fiscal 2023 later this month on August 24. It would also discuss its guidance on the same date.

Its preliminary revenue dropped by 19 per cent, but on a year-over-year (YoY) basis, it grew three per cent.

The semiconductor manufacturing firm, Broadcom Inc. had a current yield of 2.97 per cent and its annualized dividend is US$ 16.40. The US$ 221.20 billion market cap company is expected to announce its third quarter of fiscal 2022 financial results on September 1, after the closing bell of the market.

While AVGO stock has given its investors returns of 12 per cent on an annual basis, its year-to-date (YTD) performance has suffered as it slumped over 18 per cent.

The semiconductor designer and manufacturer, Texas Instruments, has a market cap of US$ 168.70 billion. Its current yield is 2.5 per cent, and its annualized dividend is US$ 4.60, respectively.

The stock of the Dallas, Texas-based firm came under pressure this year, as evidenced by the fall in its price. TXN lost over five per cent YoY while declining 2.80 per cent YTD.

Its board of directors announced a quarterly cash dividend of US$ 1.15 per share on its common stock on July 21. The dividend would be payable on August 16, 2022, the company said. 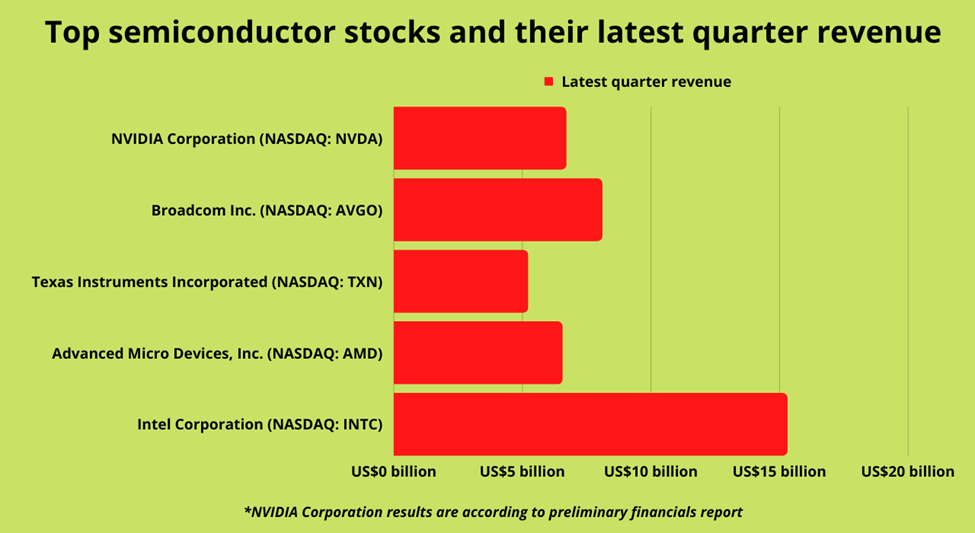 Advanced Micro Devices is another leading chipmaker with a market cap of over US$ 160.99 billion. AMD stock grew over 30 per cent in the ongoing quarter, but it has lost nearly 31 per cent on YTD basis and nine per cent on an annual basis.

In the second quarter of fiscal 2022, Advanced Micro Devices registered a 53 per cent slump in its earnings per share (EPS) of US$ 0.27.

The INTC stock witnessed choppy trading this year amid a slew of uncertainties in the market. INTC stock slumped over 34 per cent YoY while falling about 31 per cent this year. It touched a 52-week low of US$ 35.18 on August 5, 2022.

According to Refinitiv, Intel had a Relative Strength Index or RSI of about 37. Some analysts believe that a stock having RSI between 30 and 50 indicates that it could be highly volatile now.

The investors were highly hopeful about the semiconductor industry as the economy was recovering from the pandemic.  However, the industry still seems to be facing a supply crunch due to a flurry of uncertainties in the market.

The Congress passed a US$ 280 billion CHIPS and Science Act on July 28. A total of US$ 52 billion would be spent on the domestic semiconductor fabrication plants and US$ 24 billion would be reserved for a 25 percent tax credit on the new production plants through the next four years. Furthermore, about US$ 200 billion would be assigned for research purposes.

The Dow Jones US Semiconductor Index fell more than 23 per cent this year. On a QTD basis, it gained over 20 per cent.

However, given the highly volatile condition of the market, investors should closely evaluate the risks associated with the equity market.