Stock of Cheetah Mobile Inc. (NYSE: CMCM) was up 1 percent, while Qutoutiao Inc. (NASDAQ: QTT) stock was down 7 percent after reporting their second-quarter earnings on Tuesday.

Here we explore the earnings of both the companies.

The Beijing-based Cheetah Mobile is a mobile internet company that develops software for computers and mobile applications.

The net income attributable to the company's shareholders was RMB0.9 million in Q2 of fiscal 2021, compared to a net income of RMB193.7 million in the year-ago quarter. The firm now expects its total revenue for Q3 to be between RMB180 million and RMB230 million. 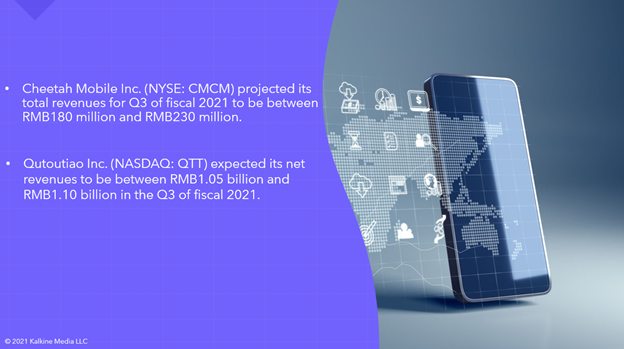 The Shanghai-based firm now expects its net revenues to be between RMB1.05 billion and RMB1.10 billion in Q3 of fiscal 2021.

Also Read: Top five stocks to explore under US$50

The software industry has been growing with the increased digitalization of various work processes. However, amid this digital expansion, data privacy and other internet security-related concerns also have been growing. Applications deemed a threat to data security were banned in many countries, including China.

For instance, Chinese tech firms have been grappling with a raft of regulations introduced by the government of late. As a result, investors might have adopted a cautious approach to some stocks considering the country-specific rules.