Stocks of Helen of Troy Limited (NASDAQ: HELE) and ConAgra Brands, Inc. (NYSE: CAG) were trending on Wall Street Thursday after reporting strong quarterly results. HELE was up around 5 percent, while the latter rose about 1 percent in the premarket trading.

Here we explore the quarterly earnings of the two companies.

Helen of Troy is a consumer products company based in Bermuda. It offers various goods like housewares, health and home items, and beauty products to consumers. 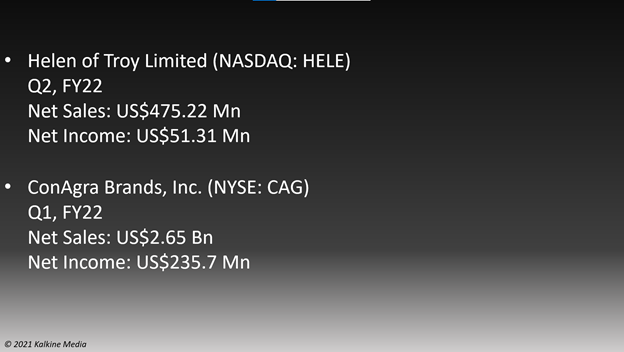 ConAgra Brands is a food company that offers packaged foods under various brand names in supermarkets, food service facilities, etc. It is based in Chicago, Illinois.

The company's Q1 earnings topped analysts' forecast as it managed to offset the rising raw material costs by increasing the prices of its frozen meals and snacks.

Also Read: Cheap EV stocks to explore in the fourth quarter of 2021

The company raised its organic net sales growth by 1 percent from its previous forecast of flat growth. It also expects its full-year gross inflation to be about 11 percent, up from its earlier estimate of 9 percent.

Both the companies have topped analysts' forecasts in their latest quarters and raised their fiscal 2022 sales guidance. Expectedly, the consumer sector is witnessing a strong rebound as the economy nurses back to health. The S&P consumer discretionary sector grew 10.28 percent YTD, while the consumer staples sector rose 4.05 percent YTD, indicating sustained overall growth over the past few quarters. However, investors should evaluate the companies carefully before investing in the stock market.