The indices ended the month of July on a positive note after witnessing a rocky first half of the year through June. The positive corporate earnings seem to have boosted market enthusiasm.

In addition, while the US GDP retreated for the second straight quarter in Q2, according to Commerce Department, it allayed fears over Fed's further aggressive stance to tame inflation.

Let's take a closer look at the earnings with Kalkine Media which can provide insights into how the enterprises are tackling the rising inflation and other uncertainties in the market.

The GPN stock traded flat following its earnings release on Monday. The US$ 34.22-billion market cap firm had a dividend yield of 0.82 per cent, and its annualized dividend is US$ 1.00. The dividend yield is the percentage or share of a firm's stock price that it pays out to the investors.

The financial technology firm caught the investors' eyes following its announcement to enter into a definitive agreement with EVO Payments, under which it would acquire the firm. The company said that the acquisition is expected to generate a combined customer base of over 4.5 million merchant locations and more than 1,500 financial bodies throughout the world.

The Atlanta, Georgia-based firm reported a GAAP revenue of US$ 2.28 billion in the second quarter of fiscal 2022, up from US$ 2.14 billion in the prior year's comparable quarter. Its adjusted revenue soared 6.1 per cent year-over-year (YoY) to US$ 2.06 billion in Q2 FY22.

The firm has reaffirmed its guidance for its adjusted revenue and adjusted earnings per share (EPS) on a constant currency basis. It expects its adjusted revenue before dispositions to be between US$ 8.48 billion and US$ 8.55 billion in fiscal 2022. Its adjusted EPS guidance came in the range of US$ 9.53 to US$ 9.75 for the ongoing year.

The software company holds a market cap of US$ 15.27 billion. Although CHPK stock fell over six per cent YoY, it returned gains of nearly 1.8 per cent this year. In the last nine months, its price rose nearly two per cent.

The IT security firm reported total revenue of US$ 571 million in the second quarter of fiscal 2022, representing an increase of nine per cent YoY. Revenue from its Product & License segment was US$ 133 million, up 12 per cent YoY, and its Security Subscription revenue was US$ 210 million, an increase of 14 per cent YoY. 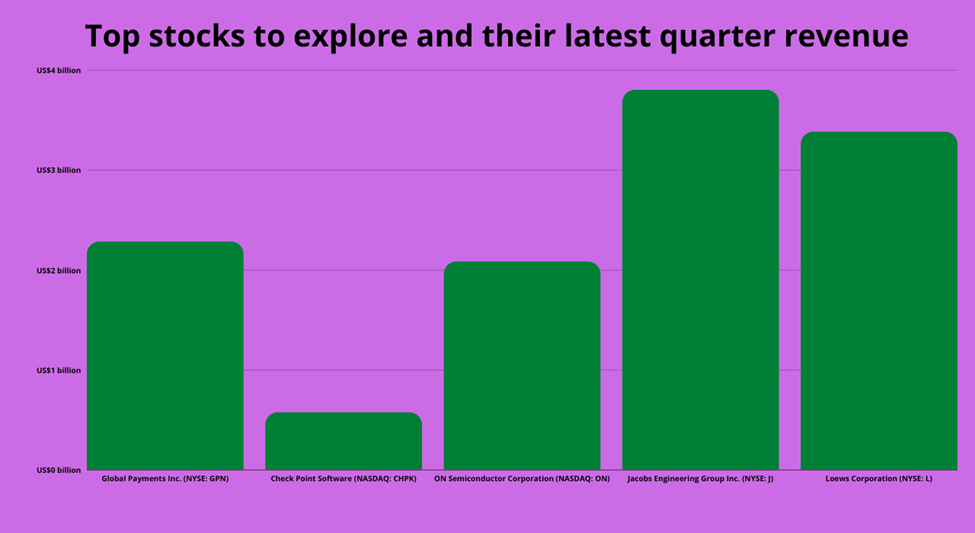 ON Semiconductor Corporation (NASDAQ: ON)

The semiconductor company has gained traction in the market, as evidenced by the surge in its price on an annual basis. ON stock gained about 62 per cent annually while adding around 25 per cent in the prior month. However, on a year-to-date (YTD) basis, it lost nearly six per cent amid a fall in the broader market.

The chipmaker came onto investors' radar following its announcement to replace IPG Photonics Corp. (NASDAQ: IPGP) and become a member of the S&P 500 index on June 3.

The Phoenix, Arizona-based firm posted a revenue of US$ 2.08 billion in the second quarter of fiscal 2022, representing an increase of 25 per cent from US$ 1.66 billion in the year-ago quarter.

The stock of the technical professional services firm had a relative strength index (RSI) of about 57, according to Refinitiv data. The 50 to 70 range of RSI suggests that the stock is currently at a neutral or stable state.

The stock of the Dallas, Texas-based company soared about two per cent YoY. However, this year, its stock lost more than 1 per cent of its stock value.

The dividend yield of the diversified company was 0.43 per cent, and its annualized dividend was US$ 0.25. The US$ 13.63 billion market cap company showed gains of about five per cent YoY while declining about 2 per cent this year.

It had an RSI of 38.04 as of August 1, Refinitiv data showed. RSI between 30 and 50 indicates that the stock is neither being oversold nor overbought, but it could be highly volatile at the moment.

Loew's posted total revenue of US$ 3.38 billion in the second quarter of fiscal 2022, showing a decline from US$ 4.00 billion in the year-ago period.

The earnings season seems to have been a major catalyst for the market in recent weeks, as evidenced by the performance of the indices. The positive earnings, especially from the big companies like Microsoft Corporation (NASDAQ: MSFT), and Apple Inc. (NASDAQ: AAPL), among others, decreased concerns over inflation's impact on corporate profits.

The S&P 500 index increased about nine per cent this month. However, on a YTD basis, it lost around 13 per cent, and on an annual basis, it tumbled nearly six per cent.

Given the soaring inflation, the rate hikes by the central bank, and geopolitical turmoil in recent days, investors should exercise due diligence before spending in the market.