Now, some might be thinking that what are meme stocks? The stocks of the companies skyrocket after individual small and retail investors create hype over it on social media platforms like Reddit, etc.

However, some traditional investors and analysts consider the meme stocks riskier than general stocks, as their price typically swings based on the interests of the retail investors.

The meme-stocks price generally rockets in a short period, mostly hours or days, due to a sudden interest from investors on online social media platforms. However, the price could reverse its track also following a sudden rally, which makes the meme stocks more volatile than the overall equity market.

The trend has gained popularity mainly in the last two years. The trend had an unofficial start in the 2020 summer when people were forced to stay at home due to the pandemic restrictions, thus providing them some time to gain some extra money from the equity market. In addition, several active users on social media also turned their focus to the equity market, bolstering the popularity of the "meme-stock" trend.

One of the most popular meme-stock, GameStop Corporation, holds a market cap of US$ 13.26 billion. The video game and consumer electronics retail firm has gained attention from investors after it announced the launch of its non-fungible token (NFT) marketplace on July 11, which would allow the gamers, creators, and community members to purchase, sell, or trade NFTs.

The stock of the movie theatre chain operator declined about 30 per cent in the past 12 months while decreasing about eight per cent year-to-date (YTD). However, in the ongoing quarter, it showed over 82 per cent gains till August 16.

It had a relative strength index or RSI of over 71, according to Refinitiv data. Some analysts believe that RSI over 70 represents the stock in an overbought condition.

The retail store operator seemed to have gained attention from the investors in recent days, as evidenced by the climb in its price. The BBBY stock rose nearly 80 per cent this year while climbing over 428 per cent in the ongoing quarter. However, on a YoY basis, it fell over four per cent.

The BBBY stock had a Relative Strength Index (RSI) of around 90, according to Refinitiv data. 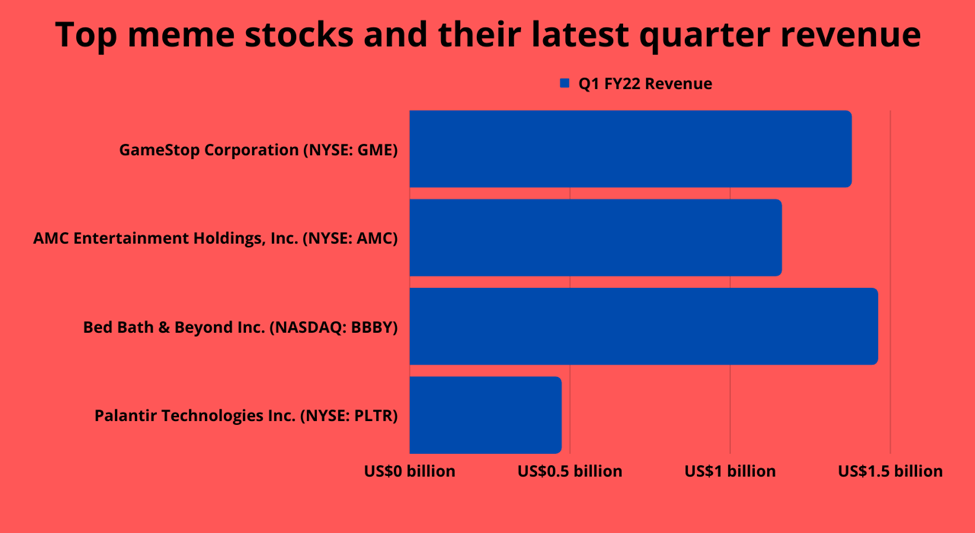 The Hong Kong-based financial technology company holds a market cap of about US$ 34.97 billion.

The software company holds a market cap of US$ 19.88 billion. The PLTR stock fell over 47 per cent YTD while decreasing nearly 61 per cent in the last 12 months. However, it showed over five per cent gains in the ongoing quarter.

The stock of the technology firm had an RSI of around 46, Refinitiv data showed. According to some analysts, RSI between 30 and 50 suggests that the stock could be highly volatile at the moment.

The year 2022 hasn't been a smooth journey so far for the wider market. Inflation is at its peak, and Federal Reserve is trying to bring it down to its two per cent target, raising concerns over slowing economic growth. Some investors also anticipate that a further aggressive stance by the Federal Reserve could tip the economy into a recession.

The S&P 500 index fell 3.82 per cent in the last 12 months while declining over nine per cent this year. On the other hand, the Dow Jones Industrial Average (DJIA) plummeted 4.51 per cent YoY while falling 6.68 per cent YTD.