Rio Tinto Plc (RIO) is a London, the United Kingdom-based leading mining and metal company and it is listed on the London Stock Exchange. Its area of operations is categorised into three segments: finding, mining, and processing mineral resources. As per the company website, Rio employs around 47,000 workforces and operating in 35 countries across six continents. Rio Tinto is a globally renowned leader in Aluminium, one of the world's most omnipresent metals. From the last 110 years, the company is engaged in the Aluminium business. The companyâs main segments include Aluminium, Energy & Minerals, Copper & Diamonds, Iron Ore and Other Operations.

The Aluminium segment includes aluminium smelters, alumina refineries, and bauxite mines. But its bauxite mines operations are in Brazil, Australia, and Guinea.

The iron ore segment provides the international seaborne iron ore trade and is situated in the Pilbara region, Australia.

On 19th June 2019, the company announced an update on Iron Ore guidance. The group is presently undergoing mine challenges, mainly in the Greater Brockman hub in the Pilbara region of Western Australia. From this, there was a rise in the amount of certain lesser grade products, partially to protect the superiority of the leading Pilbara Blend.

Considering these challenges, there has also been a review of mine plans, resulting in guidance of Pilbara shipments of 100 per cent basis for 2019 being revised to be in the range of 320-330 million tonnes as compared with the earlier estimates of 333-343 million tonnes. The company said that âwith the modification in the volume guidance, unit prices will be updated in the Q2 FY19 Operations Review (due on July 16, 2019).

On 12th May 2019, the groupâs giant copper project in Mongoliaâs Gobi Desert will be in the attention, when a long-running argument with a dissident shareholder comes to a head in Canada. Oyu Tolgoi is one of the companyâs most important development assets. The Anglo-Australian company is managing the construction of a $5.3 billion underground project aimed at lifting output to 550 thousand tonnes of copper per year. Once it gets finished, it will make Oyu Tolgoi as the worldâs third-largest source of copper. While the company operates the mine, it does not have a direct shareholding. Oyu Tolgoi is in fact 34 per cent owned by the Mongolian government and 66 per cent owned by Turquoise Hill Resources. The company owns a controlling 50.8 per cent stake in Toronto-listed Turquoise Hill, which has seen its market value becoming halve over the past year to $2.9 billion. But the company said that it will provide an update on the project in August alongside its interim results.

On 17th April 2019, Joanne Farrell, Group Executive has planned to retire later and spent almost 32 years with the company and will exit from the Rio Tinto at the end of September 2019. 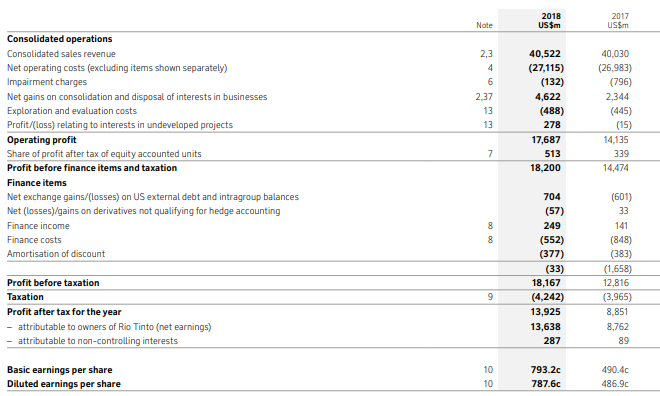 In FY18, the company reported consolidated revenue of $40,522 million, which was $492 million above the FY17 data. Underlying EBITDA during FY18 stood at $18,136 million and it was comparatively 2% lower than the 2017 data, on account of rise in energy cost and raw material cost. Net Profit after tax (attributable to common shareholders) for FY18 stood at $13,638 million and was significantly up by 55.6% against FY17 data.

Net Cash flow generated from operations stood at $11,821 million, down by 15% as compared to the FY17 data, particularly led by higher tax payments in connection to their FY17 profit and unfavourable movement in the working capital.

Capital expenditure for FY18 stood at $5,430 million and surged by 21% from last year, mainly due to crucial projects ramped up, including Amrun bauxite project in Queensland, You Tolgoi underground copper mine in Mongolia and completed implementation of Auto Haul, automation of their Pilbara train system. In FY18, the company generated free cash flow of $6,977 million, down by 27% against FY17 data.

Stock's Beta of 1.37 makes it highly volatile against the benchmark index. Rio's dividend yield stood at 4.77 per cent, which was higher against its peers operating within the same line of business. In last one-year, the stock was up by 14.55 per cent and on three months basis, the stock price surged by 14.31 per cent.

For the next couple of years, it seems global growth likely to get weaken, unless US monetary policy normalises, and on-going trade tension put on rest. A surge in the commodity prices in FY19 will have a favourable impact on the financials of Rio.

The chairman of Rio Tinto, Simon Thompson said that the steel is important to human progress and there are no apparent substitutes for it in an array of applications.

Rio Tinto has a leading global presence in the aluminium and copper industry. However, the evolving regulatory standards can result in a higher litigation cost which can have an adverse effect on Rio Tinto's earnings and cash flows.