We would review two basic materials stocks given the above market conditions- Xtract Resources PLC (LON: XTR) & Red Rock Resources PLC (LON: RRR). Based on 1-year performance XTR and RRR were up by about 30.43 percent and 4.12 percent, respectively (as on 5 August 2020 before the market close at 12:05 PM GMT+1). Let's skim the financial and operational updates of the two companies to understand the stock better.

Xtract Resources PLC (LON: XTR) is a UK based mining company engaged in the exploration, development and production of projects in Australia and Africa. The Company has interests in projects such as Manica Gold, Manica Alluvial, Eureka Copper, Bushranger Copper-Gold. The Company is included in the FTSE AIM All-Share index.

In Q1 FY20, at Manica Alluvial Mining, the total contractor alluvial gold production was 467 ounces that was lower than 1,045 ounces produced in Q4 FY19, whereas the share of gold attributable to exploratory was 131 ounces. The activity was subdued in Q1 FY20 due to the delay in spare part delivery from China following the coronavirus impact. The value of explorator share of gold produced in Q1 FY20 was USD 208,396 lower than USD 438,119 in the previous quarter.

1-Year Chart as on August-5-2020, before the market close (Source: Refinitiv, Thomson Reuters)

The Company expects the acquisition of Bushranger gold-copper deposit to strengthen the portfolio of Xtract as it is expected to have 350,000 tonnes of copper with a tendency for the future discovery of deposits. Xtract plans to start a mining contract with a new Chinese company at Manica in line with the terms agreed with the previous contractors. The operations at Manica hard rock is steady, and it is expected to advance.

Red Rock Resources PLC is a UK based company that develops and explores mines, and it has an interest in gold, manganese, cobalt and copper. The Company has investments in projects including Migori Gold Project in Kenya, Copper-Cobalt JV in the Democratic Republic of Congo. Red Rock also has a stake in companies such as Elephant Oil Ltd and Jupiter Mines Limited. The Company is included on the FTSE Aim All-Share index. 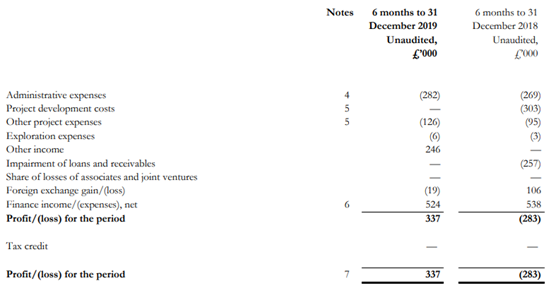 In H1 FY20, the profit before tax from the continuing operation was £337,000, which was a loss of £283,000 in H1 FY19. The diluted earnings per share were 0.047 pence. As on 31 December 2019, the Company had total assets of £11.4 million and cash of £0.1 million. The Company refrained from writing back any impaired charges of the total £5.28 million that the Company charged in 2015 related to the Kenyan assets. In February 2020, the Company reported the identification of two open-ended areas in Copperbelt in the Democratic Republic of Congo that has characteristic of copper and cobalt. In March 2020, the Company issued new ordinary shares to the vendors. The Company held 17.02 million shares in Jupiter Mines Limited and following the promising performance by Tshipi manganese mine of Jupiter it declared a dividend of ZAR265 million. Jupiter Mines Limited owns 49.9 percent Tshipi Borwa manganese mine in South Africa.

1-Year Chart as on August-5-2020, before the market close (Source: Refinitiv, Thomson Reuters)

The Company is working for the renewal of exploration license for the Luanshimba copper-cobalt mine in the Democratic Republic of Congo and restoration of licenses in Kenyan mines. The Company highlights the pandemic has impacted the market for all metals in the short-term, excluding gold. The economies are investing money to cope up with the pandemic, and the Red Rock expects that the demand for battery metals would bounceback soon.