Highland Gold Mining Limited (LON: HGM) & Kodal Minerals PLC (LON: KOD) are two basic material stocks. Shares of HGM & KOD were down by close to 0.14 percent and 16.67 percent, respectively against the previous closing price (as on 2 September 2020, before the market close at 11:50 AM GMT+1). 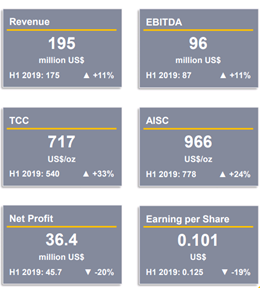 On 31 July 2020, Highland Gold Mining entered an agreement with Fortiana Holdings Limited. As per the deal, Fortiana would purchase shares from Directors Eugene Shvidler and Valery Oyf and other key shareholders at a cash price of £3 per share. The shareholding for sale constitutes close to 40.06 percent of the total issued capital.

1-Year Chart as on September-2-2020, before the market close (Source: Refinitiv, Thomson Reuters)

In FY20, the Company expects to produce gold in the range of 290,000 ounces to 300,000 ounces. It has started the construction work at Baley ZIF-1 Tailings heap leach project, and the first gold production is expected in 2022. The project is expected to produce an average of 15,000 ounces of gold over 11 years period.

Kodal Minerals PLC is a UK based company that is focused on lithium projects. The Company has an interest in Bougouni Lithium project in Southern Mali and the gold projects in Côte d'Ivoire and Mali. Kodal Minerals is included in the FTSE AIM All-Share index.

On 1 September 2020, Kodal Minerals announced that it had signed a memorandum of understanding with Sinohydro Corporation Limited. Sinohydro is engaged in engineering, construction and infrastructure development, and it is a subsidiary of Powerchina, a Chinese state-owned enterprise. As per the deal, Sinohydro would conduct a review of the proposed development of the Bougouni Lithium project on its own expense, and it would provide inputs related to procurement and civil engineering for the feasibility study of the project. It would assess the funding requirement for the project, and it would help in arranging the financing. Sinohydro would work closely with Suay Chin International Private Limited and Shandong Ruifu Lithium Industry who are other key stakeholders in the project. The Company expects that Shandong Ruifu would be the end-user of spodumene product that would be produced in the Bougouni project. Sinohydro has an exclusive right for six-months for review and suggestion on funding for Bougouni project.

In FY20, the Company completed the feasibility study of Bougouni Lithium project, and it lodged the mining application in January 2020 with the Mali government. In April 2020, Kodal Minerals secured financing facility through a share subscription for £0.5 million and linked equity sharing agreement. The Company entered a convertible loan agreement for USD 1.5 million in July 2020. It received the first payment of USD 750,000 for the loan while second payment would be received on the date of mutual agreement. The loan is at 9.85 percent.

1-Year Chart as on September-2-2020, before the market close (Source: Refinitiv, Thomson Reuters)

The Company is hopeful over the deal agreed with Sinohydro for the Bougouni project. The technical assessment by Sinohydro would strengthen the outcomes of the current feasibility study performed by the Company. As per the feasibility study performed by Kodal Minerals, the Bougouni project has a mine life of 8.5 years, and it could have an average annual production of 220,000 tonnes of 6% spodumene concentrate. The capital requirement for the development of the project is expected to be around USD 117 million.