Given the above-market conditions, we would review two basic materials stocks -  Bacanora Lithium PLC (LON: BCN) & Keras Resources PLC (LON: KRS). Based on 1-year performance, BCN and KRS were down by 50.65 percent and 68.07 percent, respectively. Let's walk through the financial and operational updates of the stocks.

Bacanora Lithium is a UK based mining company engaged in the exploration and development of lithium. The Company has projects in Mexico and Germany. The Company is listed on the FTSE AIM All-Share index.

The work continues to progress at the Sonora Lithium Project in Mexico after the Company faced some disruption due to the pandemic. The priority of the Company is to complete the project engineering work at the site. By H1 2021, Bacanora plans to complete the financing of the project and start the site work. The start of the lithium production would allow the Company to supply to the Ganfeng Lithium and Hanwa Corporation, who are the buying partners. Ganfeng would perform flow sheet engineering on Sonora in Q3 2020, and it would provide engineering services to produce battery-grade lithium at Sonora in Q4 2020. Sonora Lithium Project is expected to have 8.8 million tonnes of lithium carbonate equivalent resources, and Bacanora plans to produce 35,000 tonnes of lithium carbonate per annum from this project.

In October 2019, the Company secured funding from Ganfeng Lithium. Ganfeng invested £14,400,091 and acquired 29.99 percent stake in Bacanora, whereas invested an additional £7,563,649 and acquired a 22.5 percent stake of Sonora Lithium Ltd. In November 2019, the Company raised £7.7 million through the placement of shares. In February 2020, the Company cancelled the option to purchase 50 percent holding of Deutsche Lithium GmbH from SolarWorld AG, and it would provide funding of €1.35 million over next two years for Deutsche Lithium's operation. Deutsche Lithium GmbH owns the Zinnwald Lithium Project in Germany. As reported on 28 May 2020, the Company had cash of USD 45 million. 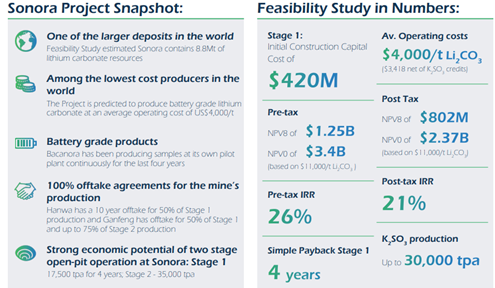 1-Year Chart as on July-31-2020, before the market close (Source: Refinitiv, Thomson Reuters)

The Company has high hopes on the production of the Electric vehicles and believes that the car manufacturing and part supplier companies would require specialist materials and lithium batteries to increase the output. The Company stated that the lithium demand would grow by 800 percent in 2030.

Keras Resources PLC is a UK based mining company that has an interest in operations at Diamond Creek Phosphate Project in Utah and the Nayega Manganese Project in Togo. The Company is listed on the FTSE AIM All-Share index.

On 30 July 2020, the Company announced the acquisition of 51 percent stake in Falcon Isle Holdings LLC (Falcon Isle). Falcon is the owner of the Diamond Creek mine in Utah, US, and the mine is organic phosphate operating with high-grade iron shipping ore. As part of the deal, Keras Resources would provide a loan facility to Falcon of USD 2.5 million. The funds would be paid in four instalments and would increase the stake in the proportion of the investment. Tranche 1 would require payment of USD 0.7 million and provide ownership of 20 percent that would increase to 51 percent following three payments of USD 0.6 million each. The Diamond Creek mine's expected direct shipping ore production would increase from 5,000 tons in year 1 to 48,000 tons in year 5, whereas the operating cost would be brought down from USD 229 per ton in year 1 to USD 92 per ton in year 5. The mine would require a capital investment of USD 468,000. Keras Resources would raise £1.73 million through the issue of new shares to fund the transaction. The Company would place close to 1.44 billion shares at 0.12 pence per share, and a warrant would be issued for every two shares placed.

In H1 FY20, the Company reported a loss of £809,000. It had cash of £87,000 and total assets of £1,463,000. During the period, Nayega manganese project had an annual producing capacity of 75,000 tonnes, and once the Company gets the exploitation licence, the plan is to expand it to 300,000 tonnes per annum. In November 2019, the Company completed the demerger of Calidus Resources Limited. As part of the transaction, shares of Calidus were transferred to Keras with a value of more than £19 million. 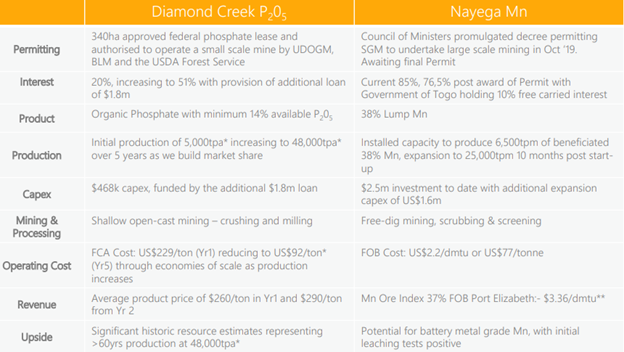 1-Year Chart as on July-31-2020, before the market close (Source: Refinitiv, Thomson Reuters)

The Company expects to benefit from the investment in the Diamond Creek mine that has started the commercial production. The Company's focus is to build cash flow generative mining projects, and the acquisition of the Diamond Creek would be value additive. Going forward, the production of the organic phosphate would benefit from the growing organic fertilizer industry of North America. The Company's main target would be near-term cash-generating projects. Post-demerger of Calidus, Keras is poised to become a dividend-paying company once the production commences at Nayega.