Given the above-market conditions, we would review two stocks - Empire Metals Limited (LON: EEE) & Microsaic Systems PLC (LON: MSYS). EEE is a basic materials stock, whereas, MSYS is an industrials stock. Based on 1- year performance, EEE is up by 35.59 percent, whereas MSYS is down by 55.00 percent(as on 30 July 2020 before the market close at 11:30 AM GMT+1). Let's skim the financial and operational updates of the companies to understand the stock better.

Empire Metals Limited is engaged in the exploration and development of gold and copper mining projects. The Company has an interest in projects such as Kvemo Bolnisi East, Greater Kvemo Bolnisi, Tsitel Sopeli, Dambludi, Tamarisi and Balichi. The Company has operations in the UK, Austria and Georgia. In Georgia, the Company operates in JV with Caucasian Mining Group. The Company is incorporated in the British Virgin Islands, and it is included in the FTSE AIM All-Share index.

The Company reported an operating loss of £214,792 in H1 FY20, which narrowed from an operating loss of £325,335 a year ago. The profit for the period was £256,515 as Empire earned a profit of £471,307 from JV. The Company restored the exploration and evaluation cost that was previously impaired at the Bolnisi Project licence area as it received confirmation of the tenure from the National Agency of Mines (NAM). Empire generated net cash of £313,529 in H1 FY20. As on 30 June 2020, the Company had cash of £364,369. In April 2020, the Company announced a deal to acquire 41 percent stake from Artemis Resources Limited in the Munni Munni Palladium project in Western Australia. Artemis Resources has been challenged by Platina Resources Limited, the 30 percent owner of the JV with Artemis Resources on Munni Munni project, for signing the deal with Empire. As per the report, the Munni Munni is expected to have 1.14 million ounces palladium, 0.83 million ounces platinum, 0.15 million ounces gold and 0.07 million ounces rhodium. In February, Empire raised £600,000 through the issue of new shares. 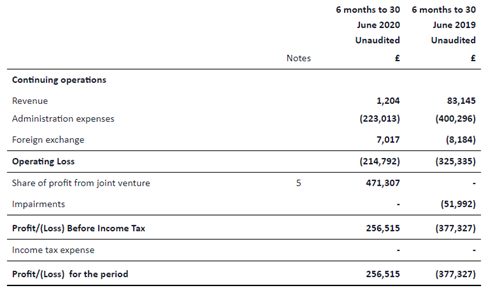 Microsaic Systems PLC is a UK based company engaged in the research, development and sales of scientific instruments. The Company manufactures Mass Spectrometry (MS) instruments, and it has more than 60 patents in chip-based, compact MS. The Company has sold more than 160 MS instruments to date, and it has three main products, namely MiD®4500, MiD®ProteinID and MiDAS®. Mass Spectrometry systematic technique for chemical and biochemical analysis and identification. Microsaic Systems operates in North America, Europe and Asia through direct sales or channel partners. The Company is listed on the FTSE AIM All-Share index.

Microsaic Systems believes that there are enormous growth opportunities available, and the Company is looking for various funding options to capitalize on these opportunities. The few options that the Company is considering include raising additional equity, strategic investment by a business partner, combination with other business entity and sale of the Company or the assets. The Company can only start the sales process under the Takeover Code. The Company has received a nod from the Takeover panel for sale discussion with third parties. BDO LLP has been appointed as the financial adviser for Strategic Review and formal sales process. The Takeover Code has granted permission that any interested party for the sales process do not need to disclose the identity publicly. The Company is in the offer period after the announcement of the formal sales process.

The Company partnered with Axcend Corp for Liquid Chromatography MS (LCMS) system, and the system combines Microsaic 4500 MiD® MS with Axcend Focus LC®. The combines system offers annual running costs savings when compared to traditional LCMS systems. The Company has cut down operational expense and anticipates that the revenue generation would be from continuing sales of consumables, spare parts and service and support income over the short-term. On 29 July 2020, Chris Buckley, Non-Executive Director has stepped down from his position with immediate effect.

Microsaic Systems has highlighted that it would achieve breakeven when it would sell 100 systems annually. As per the research, there is a market opportunity of close to USD 0.5 billion for upstream biologic analysis instruments. Unlike the traditional MS instruments that are installed in centralized laboratories and may take a few days for the test, Microsaic's MS instruments are easy to use and measure biologics in minutes per analysis. The Company is also confident about growth opportunities in care diagnostics market, including Triple Quad technology. The Triple Quad that has immense potential in food, environment and the diagnostic market has a market size of close to USD 1.4 billion per annum. Microsaic Systems plans to complete the first stage of the Strategic Review by mid-September 2020.