EasyJet’s (LON: EZJ) drubbing at the stock market on 19 July wasn’t a one-off case. Markets across the world bled, slipping in red due to concerns regarding the resurgence of Covid-19, high inflation, and high commodity prices. The travel and tourism sector was the worst hit, with the majority of the stocks slipping in the red territory.

As England marked the end of curbs related to Covid-19 on 19 July, fear of rising infection rates in summer sent jitters across stocks from the travel and tourism sector. FTSE 350 travel and leisure index fell 3.6 per cent on Monday to reach its lowest since 23 November. Companies who were expected to benefit the most from the reopening ended up as the biggest losers for the day. 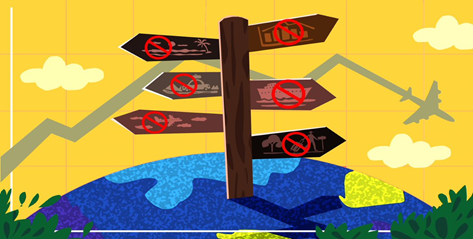 Here are 5 FTSE listed travel stocks that are reeling under pressure for last some time due to rise in Covid cases:

The company recently announced that in September, three of its ships would be resuming guest operations and another four would resume operations in October. This would take the total number of ships to 15. It also said that it would continue to operate all its ships as vaccinated cruises throughout October at least.

The shares of the aerospace and defence company have a market capitalisation of £7,279.81 million. The shares were trading at GBX 89.08, near their five months low.

Shares of the world’s leading rail and coach travel portal have a market capitalisation of £1,376.67 million. The shares were trading at GBX 285.