BT Group Plc (LON: BT.A) announced on 7 October 2020 that it would commence its new Manchester office for the employees in late 2023. The new office will come up at New Bailey situated near the Manchester city centre and would be a future-fit workplace. BT’s new office would have capacity for up to 2,000 staff members, which is almost four times the present accommodation in Manchester.

BT said that the majority of its staff would keep working from home in the coming months. However, the telecom company is looking forward to providing an inspiring workplace when government and public health guidance would allow returning to office. Besides this, BT has prepared a temporary office at 125 Deansgate for its northwest employees who would opt to work in a socially distanced office environment.

The British telecom giant wanted to move ahead with this multi-million investment in Manchester because it believed that a sophisticated and state-of-the-art office environment coupled with an additionally flexible approach to work from home would play a significant role in its future.

BT said that its new office buildings would bring its workforce together in a modern environment and also contribute towards transforming the manner in which the company worked.

Liz Needleman, Regional Lead for North of England at BT Group, said that the company’s new office space would make BT one of the area’s largest employers. 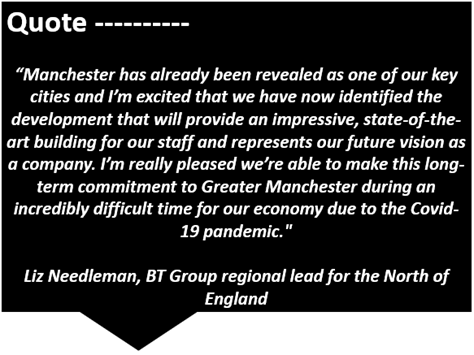 The new office space is part of BT’s ‘Betterâ¯Workplaceâ¯Programme ’, a workplace improvement and consolidation scheme. Under this programme in June 2018, Manchester was included as one of the first locations that would houseâ¯BT’sâ¯workplaces of the future.â¯The five-yearâ¯programme intended to improve and consolidate BT’s corporate offices, specialist sites and contactâ¯centresâ¯across Britain.â¯

The telecom major desires to improve efficiency and increase productivity, apart from enhancing its ability to better service its customers.â¯According to an estimate, BT had generated around £1.6 billion contribution for the North West’s economy, expressed as gross value added (GVA), in the fiscal 2017-18.

With this announcement, Manchesterâ¯has joined other British locations that have already been announced. Some of these consisted of London, Warrington, Belfast, Birmingham, Bristol, Cardiff, Edinburgh, and Ipswich (Adastralâ¯Park).

Also read: Telecom Industry And The Rising Bandwidth Pressure Amid The Coronavirus Outbreak

On 29 September, BT announced a deal with Finland’s telecom company Nokia Corporation. According to the arrangement, Nokia would become BT’s largest equipment supplier for 5G networks across the UK. The Finnish giant would replace the Chinese telecom company Huawei as the British government restricted all its telecom companies from purchasing 5G equipment from Huawei.

In the first deal after the government’s ban in July, Nokia said it would provide BT with various equipment, including base stations. This would enable BT to provide superfast 5G internet to its customers. The transition would cost BT around £500 million. For the entire replacement of its 5G equipment from Huawei, BT would use other suppliers too.

In the end-July, BT Group presented its first quarter (Q1 2020) results in which it reported revenue of £5,248 million, down 7 per cent. This was due to the coronavirus-led crisis. The adjustedâ¯EBITDA at £1,813 million, decreased 7 per cent as revenue fell and the company invested in increasing the experience level of its customers. The profit before tax (PBT) at £561 million was down 13 per cent because of reduced EBITDA and rise in interest expense, among other reasons. The capital expenditure at the company remained flat at £927 million with rise in network investment compensated by lower customer and expenditure in non-network infrastructure. In its outlook for 2020-21, the adjustedâ¯revenue is likely to be down 5–6 per cent.