i3 Energy Plc (LON: I3E) (TSX: ITE), an energy company with a diverse asset portfolio consisting of large land positions and associated infrastructure which produce circa 9,000 boepd in Alberta, Canada, is ramping ahead with its stated policy of return-driven buying and building and is in the final leg of its plan to start returning value to its shareholders by way of a special dividend. Its four-stage business plan will help the company leverage its strength and achieve potential growth in the future. Together with other recent activity including the Wapiti developments described below, the tie in of the Noel gas production well and planned drilling in the Clearwater formation, the company expects production to reach circa 10,000 boepd later this year and is forecasting net operating income (revenue minus royalty, operating, processing and gas transportation costs) of circa USD 44mm for 2021.

The company has significant exposure to Alberta’s top production regions that include the Wapiti, Simonette, Clearwater and Central Alberta production areas.

The company recently revealed its plan to drill two new ‘high return’ wells in the Wapiti production area with a partner in western Canada. These wells are expected to boost the output as well as the revenue at an estimated net cost of around US$2.1 million. According to i3 Energy, the cost is only 1.3-times the forecasted net operating income for the next twelve months (NTM), based on the current commodity strip pricing.

It is anticipated that the drill programme will complete early in the quarter three of this year. The wells are expected to add around 175 barrels of oil per day (boe/d) net to i3 Energy.  It has also entered an LOI (Letter of Intent) to get hold of 230 boe/d of Wapiti production, a non-core asset to the seller. Once the acquisition gets completed, which is expected to happen by the second quarter of 2021, i3 Energy intends to conduct six reactivations to bring NTM production to an estimated 310 boe/d at a total acquisition and capital cost of US$ 410,000.

Material upside potential in the UK

In the UK the company is focussed on bringing in a partner to cover the cost of appraisal drilling of its Serenity discovery, which it drilled in late 2019, owns 100% and which the company believes could contain circa 200 mmbbl of oil in place. The company hopes to conclude a farmout in the near future and move quickly to well planning for the appraisal well. 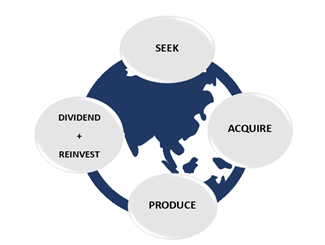 The company is focused on creating and returning shareholder value and works on a successful business model of SEEK > ACQUIRE > PRODUCE >DIVIDEND + REINVEST for that purpose. Here is what the company does in each of these stages.

SEEK- The first stage of the business strategy or model is where the company looks for high-quality assets, where the production cycle, condition, or geography presents enormous opportunity. It also ensures that the targets have a strong technical and economic underpinning.

ACQUIRE- The second stage of the business model includes the acquisition of already-in-production or late-stage development assets. These acquisitions require only last-stage financing, with favourable market conditions or cost of capital, providing a substantial margin of safety.

PRODUCE- At this stage, the company actively gets involved in the production and development operations to optimise and streamline field operations that could help in reducing delivery risk and preserve project value.

DIVIDEND + REINVEST- This is the final stage of the business model and one of the most important. At this stage, the company strives to maximise shareholders’ values. The company plans to begin issuing annual dividend up to 30 per cent of FCF soon. The remaining amount will get reinvested in PDP assets or low-cost, organic PUD and 2P reserves development within the portfolio and remain equally strategic when a large valuation gap appears.

The company is fully dedicated to building a large-scale cash-generative, full-cycle exploration & production (e&p) portfolio. It continues developing a strong production base to deliver bi-annual shareholder distributions of up to 30 per cent of the Free cash Flow (FCF), with NTM net operating income (NOI) projected to be U$ 44 million.

i3 Energy’s assets outperformed the directors' expectations in 2020, led by the strategic acquisition of a large production package at the bottom of the market. The development gave the company a leeway to reclassify its previously announced dividend of CA$ 2 million that was originally based on Q1 2021 FCF into a "special dividend", which will be paid if the court proceedings to cancel i3 Energy’s share premium account are successful.

The company has nearly completed the necessary preparatory work and the process to obtain creditor approvals for a court-led balance sheet restructuring, which is required to create distributable reserves for further distribution of its maiden dividend payout.

The final confirmation hearing in the High Court of England and Wales is scheduled for 29 June 2021After that, the company expects to set the ex-dividend date for the special dividend as 8 July 2021 and pay that dividend in July after which it will pay pre-decided half-yearly dividends alongside the company's release of each of its Interim and Annual Reports.

Overall, i3 Energy has established itself as a trusted business proposition, making extremely valuable and profitable acquisitions in highly strategic and sought-after areas. The company has proved that it has extraordinary growth potential. Now with the situation starting to bounce back from the covid-induced blues, commodity prices are also looking up, which will strengthen the company’s outlook in the future.