Goldman Sachs Group Inc (LSE: 0R3G; NYQ: GS) is a bulge bracket Investment Banking, Securities and investment management company based in New York, the United States of America. The company is in the business of providing an array of banking and financial services to commercial and industrial corporations, governments and sovereign organisations as well as individuals. The company’s business segments include Investment Banking, which is also its core business, Institutional Client Services, Lending and Deposits and Consumer and Investment Management. The company is one of the biggest businesses in the world with offices in more than 30 countries with operations spread across industries and sectors. Through its Investment Banking business division, the company provides advisory services for complex transactions such as Mergers and Acquisitions. The company also provides strategic consulting and capital raising services via various mediums through this branch of its business. The divisions for Capital raising include – Corporate Derivatives, Corporate Finance Solutions, Equity Capital Markets (ECM), High-Grade Debt Capital Markets (DCM), Leveraged Finance capital markets as well as Structured finance services. The company provides Consumer banking operations like Deposits and Credits, Asset Management, as well as Personal Wealth Management for High Net Worth Individuals (HNWI) through its Investment Management division. Through its investing and lending business segment, the company focuses on speciality lending, private capital investing, lender finance, alternate energy investing and real estate financing services. The company’s securities management division deals with various other financial services firm by providing them market insights, risk management services, helping them in raising capital, investments, and transfer of risk by diversification. The company also has an in-house research unit that enables all the other segments of the group with research and analytics solutions.

In the United Kingdom, Goldman Sachs stock (LSE: OR3G) is traded as a Crest Depository Interest (CDI). The company’s operations are pretty much the same as they are in the United States or any other part of the world, which include Investment Banking advisory services, Mergers and Acquisitions Advisory Services, Lending, Capital and Financing advisory as well as Asset Management and Portfolio Management. Other than these, the company runs a “10000 small businesses” programme in the United Kingdom to support small entrepreneurs by providing capital and business support services. Through this programme, which is funded by the Goldman Sachs Foundation, the company provides education to young and small entrepreneurs on how to build and grow their business. 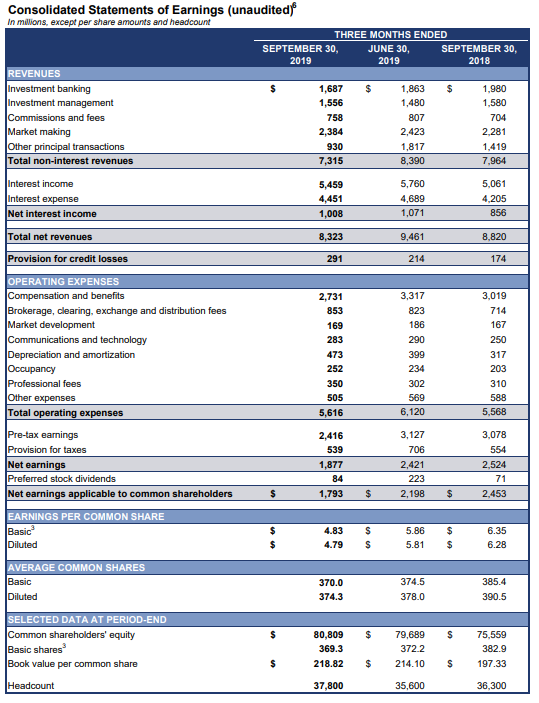 Goldman Sachs’ investment in WeWork and its impact

Goldman Sachs had made an investment in the capital of WeWork Companies Inc, a company that is engaged in the business of development of Real Estate for the purpose of renting and leasing it out majorly as office spaces and shared co-working spaces. The company’s operations are located in around 123 cities worldwide, including Birmingham, Cambridge, Edinburgh, London and Manchester in the United Kingdom. Earlier this year, the company was looking to go public by launching an initial public offering, which later ran into trouble, after investors got worried of its huge losses, cash burns and its business model that lead to a decline in the company’s valuation. Goldman Sachs which along with JPMorgan was preparing loans worth $6bn after the share sale, lost around US $80 million on its investment after the valuation of the company went down sharply. The incident contributed to Goldman Sachs’ 26 per cent year on year decline in profits, which was further aggravated by its stakes in other companies like Avantor Inc. and Uber Technologies Inc. which hasn’t done well on the Wall Street post its listing. Goldman Sachs’ Chief Financial Officer, Stephen Scherr said that the value of the group’s stake in WeWork could further fall below the current value of US $70 million, leading to slump in share prices on the stock exchange.