IG Group Holdings PLC (IGG), with headquarters in the UK, provides an online trading platform in the Over the Counter (OTC) leveraged derivatives, exchange-traded derivatives and share dealing and investment instruments globally. The company primarily offers leveraged derivatives that include contracts for differences (CFDs) and spread betting (provided in the UK and Ireland only).

On 23rd July 2019, the company reported a fall of almost a third in its earnings for the financial year 2019, driven by Europe’s clampdown on the provision of entry to high-risk financial betting to amateur traders. The mid-cap company, which permits individuals and other non-institutional retail investors to bet on currency, stock, and oil market moves, said pre-tax profit decreased by 31 per cent to 194.3 million pounds for the financial year 2019. 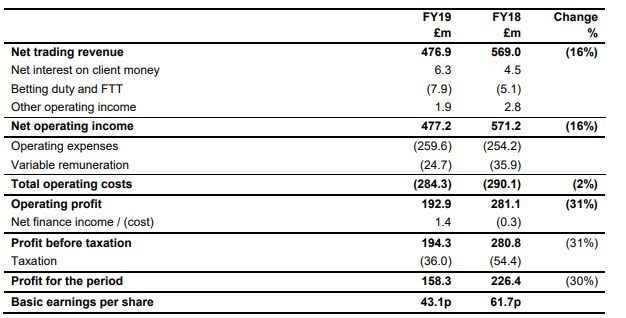 Daily Chart as of July 26, 2019, after the market closed (Source: Thomson Reuters)

On the valuation front, the company’s stock was trading at a trailing twelve months PE multiple of 13.3 times against the industry median of 12.3 times. The company’s stock beta stood at 0.14, reflecting lower volatility from the benchmark index. Total outstanding market capitalisation stood at around £2.07 billion with a dividend yield of 7.71 per cent.

Some Risks are Regulatory headwinds, especially lower leverage from other markets in which IG operates; falling and low volatility, reducing the incentive for clients to trade; sustained fall in the active client’s growth rate and the financial services transaction tax or changes in tax rates.

The company had shown weak financial performance in the financial year 2019, though, the company expects its revenue to grow in the Financial year 2020. The company will make an additional investment towards potential acquisition to promote the IG brand. The company believes that the macroeconomic and demographic trends of surging wealth and financial awareness, combined with a move towards self-direction, will support to increase the business. The company will make necessary changes in its operations for the growth of its client base and will focus on building new businesses in the USA and EU.

In the six months to 30 April 2019, the net cash outflow stood at £0.7 million. This net cash outflow includes amount raised of £0.8 million from the issue of shares before expenses and collecting £0.6 million for the Research & Development tax credits due at the year-end.

On 30th April 2019, the cash balance was £1.9 million against the £4.0 million in the same period of FY18, through a further £4.0 million before expenses available to be drawn down from the convertible bond facility. After the 30th April 2019, an additional amount has been raised of £1.1 million to fund the Go-to-Market strategy. During the last six months, the balance sheet had been strengthened from the strict expense and cash flow control, funds raised and available facilities. In respect of this half-yearly period, the Board of the company has not declared any dividend.

With the successful demonstration of CH2ARGETM prototype, the company is entering into the high growth EV (Electric Vehicle) charging market. This is the first electric vehicle charger in the world and has created on hydrogen fuel-cell technology. The company has signed an agreement with Rolec (Rolec Services Limited). In response to off-grid power genset market and emerging opportunities in the EV charger, the company had appointed a dedicated sales team. The company is also expanding its product variety through the ongoing development of supplementary products with decreased operating and footprint costs.

In the coming months, the company will launch numerous new products, which will enable it to provide a wider range of consumer solutions. The company will do the expansion in the high-power density fuel cell project, which will decrease the footprint of the existing fuel cell and not only increase the power density but can also become a game-changer through alkaline electrolysis. For the EV charging solution, fully funded demonstration programme includes engagement of a commercial team with experience both in diesel generator markets and introducing new disruptive technology, building a re-locatable demonstration unit, and agreement to stage numerous roadshow events to EV charging operators. The company has expanded and increased the website visibility with greater importance on consumers, products and solutions.

Daily Chart as at July 26, 2019, after the market closed (Source: Thomson Reuters)

On the valuation front, the company’s stock was trading at a trailing twelve months PE multiple of negative 4.9 times against the industry median of negative 3.3 times. The company's stock beta was negative 1.00, reflecting negative correlation as compared to the benchmark index. Total outstanding market capitalisation stood at around £21.30 million.