Generally, the investors are interested in making a diversified investment, as investing across sectors, geographies, multiple assets, and classes help an investor to manage the risks effectively. It helps to narrow down several of outcomes between anticipated and best-obtained return. Also, it helps in decreasing the dependency of a stockholder on any one investment. Here we are discussing two stocks from different sectors.

Ferguson Plc (FERG) is a Switzerland-based holding company, specialising in the distribution of plumbing and heating products and is headquartered in Zug, Switzerland. With 2,280 branches spread across three regions with 19 distribution centres, the company aims to bridge the gap between the large supplier base and geographically scattered customers through its 5,900 strong fleet vehicles. The group is a specialist distributor and has served over 1 million customers who are assisted by the company's 35,000 associates.

The companyâs CEO, John Martin, said that the demerger would permit both Ferguson and Wolseley UK to emphasis on accelerating the implementation of their independent plans, offering clear investment propositions for each commercial. The Wolseley United Kingdom has a robust market position, a skilled management team, and leading client propositions, through substantial prospects for expansion in the huge and fragmented plumbing, heating and infrastructure markets. The company will continue to implement its successful strategy, market outperformance, generating attractive returns for shareholders, and building on a robust track record of profitable growth.

The company on the same date announced that the group CEO, John Martin, will step down on 19th November 2019. The company has been significantly strengthened and simplified in his tenure, substantially improving its excellent returns and market positions for shareholders. The companyâs board said that Kevin Murphy would take the place of John Martin as Group CEO.

The company will keep on investing organically in the businesses augmented by boltâon acquisitions in the main operations. The company had robust financial performance in line with the capital allocation policy. The company is initiating a share buyback programme of US$500 million, which they anticipate completing over the next twelve months.

Daily Chart as at September-12-19, before the market close (Source: Thomson Reuters)

Based upon trading over recent weeks, the company has several reasons to be confident that the financial year 2020 will be another fruitful year for the group as driven by EPS which is expected to increase to 99.7 pence, DPS to surge to 32 pence, revenue to go up to Â£2.2 billion, sales outlets are likely to increase to 135 outlets, ROCE (return on capital employed) to be more than 25 per cent. It also expects to maintain land holdings at 4 years, waste diverted from landfill to be less than 95 per cent, HBF (Home Builders Federation) 90 per cent customer recommended rating, maintain an appropriate balance in availability of product in the right areas, maintain level of trainees at 15 per cent of an increasing workforce, and accident incident rate to be maintained at 0.3 or below. 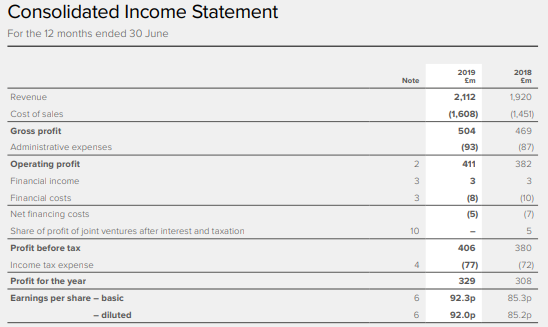 In FY2019, the companyâs reported revenue surged by 10 per cent to Â£2.1 billion as compared to Â£1.9 billion in FY18, with homes revenue rising by 10 per cent to Â£2.1 billion (FY18: Â£1.9bn) and other revenue from land sales was Â£21 million and also in line with the previous year (FY18: Â£20 million). Gross margin decreased by 50 basis point to 23.9 per cent against the Â£24.4 per cent in FY18, driven by the change in tenure mix of the residential housing turnover with Homes revenue coming from Affordable Homes of 12 per cent as compared to 7.5 per cent in the previous year.

In FY19, the return on capital employed stood at 28.5 per cent and remained the same as of the last year. Return on equity decreased to 26.5 per cent in FY19 from 28 per cent in FY18. The gross investment in land surged by Â£76 million or 5 per cent in the year 2019 to Â£1,515 million, reflecting the continued achievement in securing sites to utilise the product best. The cash inflow generated from operations stood at Â£371 million (FY18: Â£276 million). The net cash balance surged to Â£124 million at the end of June 2019 from Â£63 million at the end of June 2018.

Since the start of the financial year 2020, trading has been encouraging, and the demand for the homes is robust through reservations running ahead of the previous year. Moreover, the company has exchanged contracts for an additional PRS (Private Rented Sector) scheme at Colindale Gardens, adding 347 plots to an already significant order book.

From the perspective of the market, the new homes remain resilient in spite of economic and political uncertainty. There remains robust demand for a quality product which remains to be maintained by low-interest rates. The company is well-positioned for the future with a robust order book, an outstanding product and a dedicated team to deliver.

The suppliers have increased stocks of imported goods and put in place strategies to source materials from alternative suppliers. The company has a decent balance sheet, helping it to remain agile and respond swiftly to new opportunities. Continued availability of Help-to-Buy, good access to affordable mortgage finance and high employment supports strong demand for affordable homes, as the latest UK housing market remains positive.

Daily Chart as at September-12-19, before the market close (Source: Thomson Reuters)