BP PLC (BP) is a London, the United Kingdom-based British integrated oil and gas company. It is a vertically integrated company, engaged in activities such as exploration and production of oil and natural gas to generating solar energy and marketing chemicals. The company’s operations are divided into three reportable segments being Upstream, Downstream and Rosneft.

In Q3 FY19, the company’s production is likely to be lower than Q2 FY19 in the upstream segment, due to the continued maintenance activities and seasonal turnaround, including in the US Gulf of Mexico, the North Sea, and Angolo. There was also an impact of Hurricane Barry on operations in the US Gulf of Mexico. The company expects lower industry refining margins and lower level of turnaround activity in the downstream segment. In Other businesses and corporate segment, average quarterly charges (excluding non-operating items) are projected to be approximately $350 million in FY19.

The company’s full-year 2019 NIM (net interest margin) is estimated at the lower end of its previously guided range of 165-170 bps. The company blamed refinancing of a large volume of mortgages. It has flagged slower mortgage growth and will tighten lending criteria. In Q4 FY19, the company is expected to recognise an estimated gain on sale of around £35 million from the disposal of 50 per cent of its interest in Virgin Money. If all the mortgages are ultimately priced lower than NIM would decline further.

Fresnillo PLC (FRES) is a Mexico-based precious metal group, which provides mining and exploration services. The group has seven operating mines - all of them in Mexico - along with other development and exploration projects it is the world's largest primary silver producer and Mexico's largest gold producer. It develops high potential silver and gold projects into low-cost, world-class mines, with business model spanning the full mining value chain from exploration, construction and development, to mining operations.

The guidance for total gold production was reduced by approximately 3 per cent to 880,000- 910,000 ounces, driven by the lower volumes of ore processed at the DLP and delayed in the construction of a leaching pad at Herradura. The guidance for total silver production was pruned around 5 per cent to 55 million-58 million ounces, driven by the lower ore grades. The company said that 2019 would be an overall challenging year. 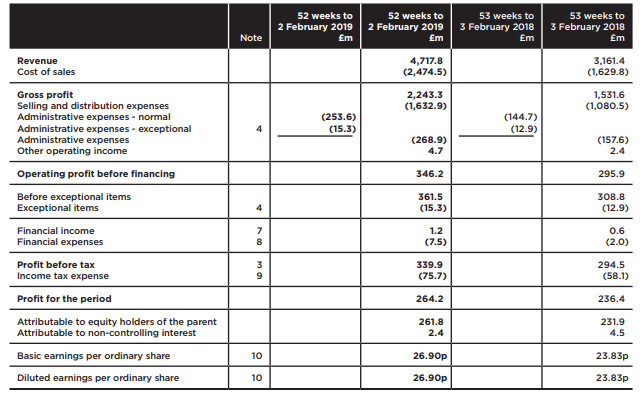 The forecast of UK sales is to hold steady, and an improvement in US margins is estimated as last year’s Finish Line acquisition begins to benefit from store conversions and better buying. The risks associated with the current uncertainty around international trade and the UK’s decision to leave the EU are included under political and economic factors. The market has underestimated its international expansion potential and the margin recovery opportunity for Finish Line business in the US, which is its calculated move.

Aston Martin Lagonda Global Holdings Plc (AML), headquartered in Gaydon/UK, is a leading luxury brand focused on the design, engineering and manufacturing of luxury sports cars. It was formed post-merger of Aston Martin and Lagonda. The company creates and exports cars in 53 countries around the world. The company is having four regional offices located in the Asia Pacific, China, Europe and the Americas.

Total revenue declined by 4 per cent to £407.1 million in H1 2019 against £424.9 million in H1 FY18, due to fewer specials and Vantage drove a lower Average Selling Price (ASP). Adjusted EBITDA stood at £22 million, a decrease of 79 per cent from the same period in 2018, while adjusted EBITDA margin was 5 per cent. Loss before tax was £78.8 million, a decrease from the profit of £20.8 million in H1 FY18. Diluted loss per share stood at 28 pence against the 4.3 pence in H1 FY18. Net cash from operations stood at £21 million due to planned £71 million inventory build-up and substantial reversal of around £90 million receivable from December 2018. Net debt stood at £732 million.

The company operates in a challenging environment which requires continuous investment, sometimes at the cost of profitability, to stay ahead of competitors. The company’s operations are affected by the uncertainty created due to ongoing Brexit, which is expected to hamper the company’s supply chain.