JET on a daily chart

The stock prices have broken a double bottom (bullish reversal) pattern at GBX 7496 level on the daily chart, and after that the prices touched the 2-month high of GBX 7859. After consolidating in the range of GBX 6347- GBX 7496 for more than one month, the price registered a decisive breakout indicating a possibility of change in trend from sideways to northward direction. The stock prices have been trading in the falling channel formation for the past eight months on the daily chart.

JET on a weekly chart 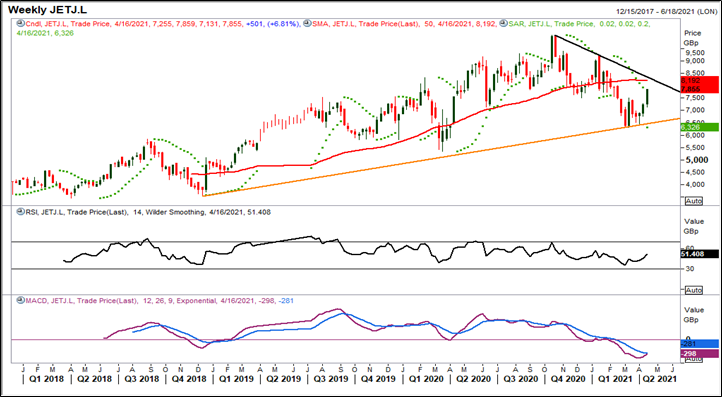 Moreover, the momentum oscillator RSI (14-Period) is trading at ~51.40 levels, which supports bullish bias for the stock. However, the stock price is trading below its 50-period (SMA), acting as a crucial resistance zone near the falling trendline. Furthermore, the prices are trading around the major resistance level GBX 8192 and a downside movement from the current levels might drift prices lower towards the rising trendline. The price is trading above its Parabolic SAR indicator and appears positive for the uptrend.

Just Eat Takeaway NV price seems to be in an uptrend, as depicted by the above chart analysis and technical outlook. Currently, the share prices are holding the key support zone. The chart pattern suggests that there might be more action expected in JET if the price remains above the support levels. If the prices break the crucial resistance level in the coming weeks, the bulls may extend the rally.