As the pandemic washed up the shores of the UK, the FTSE 100 index took a real hammering and plummeted by more than 20 per cent. However, there was a smart bounce back in the major markets, and most of the indices recovered the majority of their losses. There were lots of businesses which got trapped in the Corona avalanche, despite having good fundamentals and growth prospects.

In this article, we would be discussing some FTSE 100 stocks, which could be real bargains at their current price points and are trading near their 52-week low price point. These businesses are from diverse sectors such as Banking, Insurance, Telecommunications, and Retail.

Lloyds Banking Group Plc (LON: LLOY) provides a wide array of products and services in banking, and financial services domain focused at both retail and corporate customers. During the first quarter of 2020, the bank’s profits plunged by 95 per cent as it incorporated £1.4 billion of impairment charge based on the revised economic outlook. 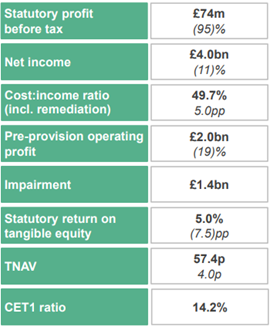 This provision incorporated by the company is expected to cover for potential defaults by customers over the coming months due to the economic impact of the novel coronavirus. There are a few challenges that are emerging in the banking space.

The emergence of P2P lenders- Fintech firms such as Zopa, have created a parallel banking industry with P2P (peer-to-peer) lending through their online platforms. Also, LIBOR has been a key mechanism for pricing all the financial contracts such as derivatives or debt securities. There have been many instances in the past where the banks have manipulated LIBOR, and a few were also charged with hefty fines. The central bank has directed the FCA and the other respective regulatory authorities to adhere to the deadline of March 2021 and switch to SONIA. SONIA is closely linked to the bank rate, which is controlled by the central bank of the country. This transition comes at a cost which the bank must bear. In addition, this would certainly impact the revenue streams of the bank.

Also read: Central Bankers-Deadline for Phasing Out LIBOR Would Not be Extended

The UK’s largest provider of home loans, Lloyds Banking Group has the potential to bounce back. The bank has a prudent approach to lending along with a strong balance sheet. Nearly 80 per cent of the loan book comprises of secured loans. The CET1 ratio of 14.2 per cent allows the bank to absorb expected credit losses with ease.

Royal Bank of Scotland Group Plc (LON: RBS) comes in UK’s top five banks in terms of market capitalisation. During the first quarter of 2020, the bank’s profits plunged by 50 per cent to £519 million as the bank was hit by a provision of £802 million to cover potential loan losses due to the economic impact of the novel coronavirus. RBS has played a major role in lending through government backed schemes.

The bank is likely to face stiff competition from the emergence of P2P lenders. To meet the new regulations (SONIA), the group needs to undergo some structural changes with increased costs, failing to do so could expose the bank to compliance failure. The bank is exposed to risky assets (loans).

However, the CET1 ratio of 16.6 per cent allows the bank to absorb expected credit losses with ease. In comparison to Q4 2019, the deposits soared to £15.6 billion as customers sought to more savings during the unprecedented crisis.

Also read: 5 FTSE 100 Stocks That Are Going Strong and Opted For 'No Dividend Cut’ During the Pandemic Era

BT Group (LON: BT.A) is one of the oldest telecom providers in the United Kingdom. In recent months, the company was in focus due to Huawei, one of the most economical providers of 5G telecom infrastructure, which is utilised by other telecom players such as BT. According to a top official of BT Group, the network infrastructure could become vulnerable to outages and cyber-attacks if the UK government decides to pull the plug on Huawei. In addition, the company is likely to face stiff competition from the recent merger of O2 and Virgin Media.

The stock has lost nearly 40 per cent of its value and is trading near its 52-week low. On 17 July 2020, at the time of writing, GMT 15:59 PM+1, BT.A shares were trading at GBX 117.05, up by 1.65 per cent against the previous day closing price. The telecom company is making major strides to improve its market share further. The company has scrapped its dividend to fibre up rural household in the UK.

Aviva Plc (LON: AV.) is a global insurer group. For the first quarter of 2020, the global net written premiums (NWP) were up by 3 per cent to £2.4 billion in the general insurance segment. The revenue from Life new business was up by 28 per cent to GBP 12.3 billion during the period.

The stock has lost nearly 30 per cent of its value and is trading near its 52-week low. On 17 July 2020, at the time of writing, GMT 15:58 PM+1, AV. shares were trading at GBX 290.80, down by 0.65 per cent against the previous day closing price. The company has strong financial disciplines and is on track to manage an unprecedented crisis.

Tesco Plc (LON: TSCO) is a well-known retailer. The company had been running its stores throughout the lockdown. When most of the industries were furloughing their employees, Tesco went on a hiring spree due to the huge surge in online orders. The group posted revenue growth of 7.9 per cent on Like-for Like basis in the first quarter of 2021.

Due to the rise in the number of infections, Tesco is likely to face competition from corner shops and independent grocery stores as people still lack the confidence to visit stores. The stock has lost nearly 15 per cent of its value and is trading near its 52-week low. On 17 July 2020, at the time of writing, GMT 15:56 PM+1, TSCO shares were trading at GBX 214.50, down by 0.65 per cent against the previous day closing price. The stock has a dividend yield of 4.27 per cent.

In recent times, these stocks have undergone steep price corrections. But amid the uncertainties around Brexit and COVID-19 crisis, these companies have managed to stay afloat. Even though they are exposed to political, financial, and operational risks, these businesses have proved their resilience in these testing times.