Volatile stocks are primarily those that show dramatic price movement in either direction; hence they are riskier than stocks that have relatively stable prices. But as the risks are high, they could offer a higher reward as well.

Beta is a common concept used to gauge the volatility of a stock in relation to the overall market. A stock that fluctuates more than the market has a beta of more than 1.0, and that moves less than the market has a beta of less than 1.0. As a general rule, high-beta stocks are riskier but offer the potential for greater return, while low-beta stocks may be associated with less risk and low returns.

It is often argued beta does not provide sufficient information about the company fundamentals and may be of limited value while making stock selections. Beta, however is regarded as a better indicator for short-term risk rather than long-term risk. 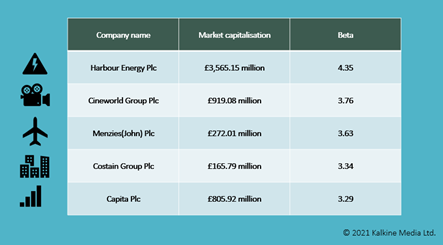 Here we take a detailed look at the top 5 volatile FTSE stocks.

FTSE 250 listed Harbour Energy is the UK’s independent oil and gas company. For the five months ended 31 March 2021, the company reported production of 162 kboepd. The company’s production guidance for the year 2021 currently stands at 185 to 195 kboepd (proforma basis) and 170 to 180 kboepd (reported basis). The company reported revenue of approximately $1.5 billion for the first five months of the year, and its average realised oil and gas prices for the period stood at around $57/bbl and 42p/therm, respectively.

Recently, Neptune Energy Group Ltd announced that it is considering a merger with Harbour Energy Plc to create one of the largest independent oil and gas firms in Europe.

On 7 April 2020, Cineworld’s board declared the suspension of a dividend of 4.25 cents per share for Q4 2019, to conserve cash. The company declared no dividend for H1 2021 as well, as the group continues to focus on the preservation of liquidity during its recovery from the pandemic.

Menzies (John) is an aviation services company. In August 2021, Menzies announced the acquisition of a 51% stake in Interexpresso, aiming to expand its footprint in Central America.

Capita is a business process outsourcing and professional services firm based in London. In August 2021, the company announced the renewal of its £124 million learning services contract with a major UK financial services client.