Serabi Gold Plc (LON: SRB) is a London, United Kingdom incorporated holding company, which, through its subsidiaries, is engaged in the acquisition and development of gold mining projects Brazil.

The Company is active in the area of Northern Brazil known as the Tapajos region where reports indicated that up to 30 million ounces of gold have been produced by artisanal miners who have been mining the near-surface oxidised material which is easy to mine and from which it is easier to extract the gold.Â The underlying hard rock which needs to be crushed to allow the extraction of the gold is left behind.Â It is these hard rock deposits that Serabi is now mining.Â In more established mining areas of the world, underground mines can extend for over one kilometre in-depth, and there is every reason to believe that Serabiâs mines could also extend to such depth.Â For this reason, it can be considered that Serabi could discover significantly more gold in the region and its mines could continue to produce to tens of years.

The Tapajos region extends across an area of 100,000 sq.km, within which, the company has concessions amounting to around 97,000 hectares of land. Â These are divided into the Jardim do Ouro district which contains Serabiâs existing mining operations of the Sao Chico and Palito deposits but also some extremely exciting exploration discoveries which could be significantly larger than both of these current operations.Â The Company has also purchased in 2017 the Coringa Gold Project, which is located nearby and the Company is in the process of obtaining the permits necessary to put this mine into production in the near future.

The Sao Chico Gold Mine

Serabi is the operator and fully-owns the Sao Chico Mine, situated close to the Sao Chico village, and like its Palito operation, it is a place that has been the subject of a lot of historical artisanal mining. Â Mostly these artisanal miners exploit the top 20 to 30 metres of soft material that is easy to dig and then abandon the mine when they reach the harder rock.Â The company acquired the project in 2013 and very quickly commenced work in early 2014 to develop the Sao Chico Gold Mine.Â The opening up of the entrance to the mine and initial development of a ramp to access the mine took several months, and the Main Vein which is currently the main area of mining activity was intersected by the mine development approximately 30 metres below the surface in January 2015. Â Â The Company continued to develop and deepen the mine, and it was only later in 2015 when the development of the ramp meant that the company now had three separate development of three development levels in operation that it stated to extract ore from the stopes. Â Soon after, effective as of 1 January 2016, commercial production at the mine was announced. Â Through a combination of continued drilling and underground development, the Sao Chico deposit has now been identified to reach to over 500 metres of strike length and to a depth of over 300 metres.Â In addition, the company has identified a number of additional parallel vein structures such as Julia.

The company recently reported the results of an on-going surface and underground exploration diamond drilling programme, which confirmed the extension of the limits of the current mineral resources.

The company highlighted that the step-out drilling programme, that began in the fourth quarter in 2019 resulted in:

The underground drilling additionally confirmed the extension of current Sao Chico orebody for another 100 metres below the lowest level of the existing operations, which is currently 250 metres below the surface. 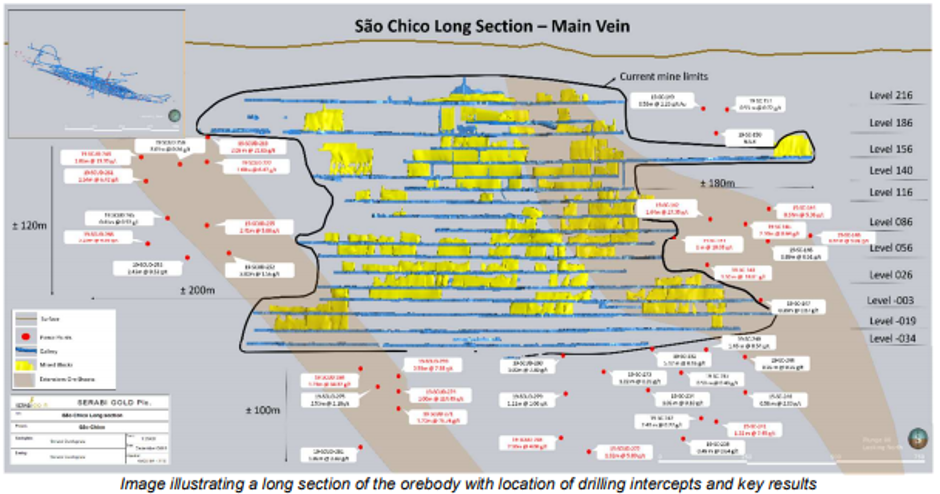 (Source: Thomson Reuters) Daily Chart as on 20-January-20, before the closing of the LSE Market

The company since long has accessed the potential of Sao Chico mine and started an aggressive surface and underground drilling programme in and around the orebody. The positive outcomes here are going to be the guiding force for the company to its further expansion plans. The company has already completed one-fifth of the planned programme and is hopeful of completing it by the end of the first half of the year 2020. The positive outcome (data) from the programme will help the company set the preparation of a revised geological resource and mineral reserve in the third quarter of this year. The company has also received optimistic results of RC drilling, just two kilometres to the west of the Sao Chico orebody and exploration success here could lead to development in production from the Sao Chico orebodies in the longer-term. Meanwhile, the company has raised its 2020 full- year production guidance to be in the range of 45,000 ounces and 46,000 ounces. Overall, year 2020 is expected to be a landmark year for the company to build on the foundation following the companyâs encouraging performance in the last year, both in terms of production as well as the exploration of new resources.