Corporationsâ latest results announcements related to them have a direct bearing on the movement of their stock prices on the exchanges, either upward, downward or sideways, based on the significances they have on their future operating performance. Here we are going to discuss results of two companies operating in diverse sectors, which have come up with some announcements recently, which have impacted their stock price movements.

Below are two LSE listed companies operating in the diverse sector.

Hays Plc (HAS) is a London, the United Kingdom-based recruitment company. The companyâs business is differentiated in four segments geographically: Australia & New Zealand, Germany, United Kingdom and Ireland and Rest of World. The group has its operations across 265 offices spread out in 33 countries.

In FY19, the company invested additionally into back-office scalability and consultant productivity tools. The company restructured is operations, primarily in Europe, and incurred a Â£6.8 million charge. This exercise is projected to deliver annualised pro-rata cost savings of Â£5 million. The company also opened 8 new offices internationally and made further significant office expansions in Europe, the Americas and Asia. Year-end company consultant headcount increased by 4 per cent, although it was by 2 per cent since 31st December 2018.

The company ended the year with enough cash and the Board increased the full year 2019 core dividend by 4 per cent. The Board declared the companyâs 3rd successive special dividend of Â£79.7 million. In the first two years of current plan ending in the next three years, the company has paid out Â£265 million in total dividends.

Across the years, the company have built a highly diversified business to access the worldâs most exciting sectors and markets. This plan has determined much of the current growth and positions to capitalise on the substantial long-term structural prospects. Despite an increasingly tough international economic backdrop, the companyâs market position has remained undiminished and, combined with highly experienced international management team, it enjoys a robust financial position. The company said that it would continue to balance the long-term potential with the several challenging markets it currently faces.

Daily Chart as at August-29-19, before the market close (Source: Thomson Reuters)

Hunting PLC (HTG) is a London, United Kingdom-based international energy services provider, which specialises in manufacturing, trading and renting high-quality upstream equipment for the well-bore. The groupâs wide range of products and associated services spans assist in extracting hydrocarbons across the lifecycle of an oil and gas well, and its customers include national and international oil companies, major energy services groups and other key members of the energy supply chain. The companyâs operations are differentiated into five operating segments: Hunting Titan, US, Canada, Asia Pacific, Exploration and Production, and Europe, Middle East and Africa. 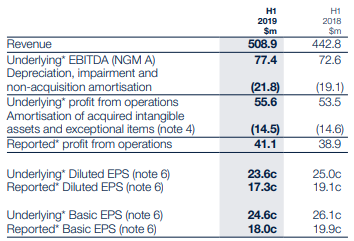 During the first half of 2019, operators were encouraged to increase drilling and production expenditure within the lower-cost shale basins as the average WTI crude oil price was approximately 29% higher in the H1 FY19 at $58 per barrel. US segment revenue increased by 23% to $181.1m, supporting an increase in the groupâs revenue of 15% to $508.9m.

Reported gross profit rose by 6% to $145.6m in H1 FY19 with gross margin at 28.6%, reflecting managementâs actions within Hunting Titan to decrease inventory levels and pricing on certain product lines. Profit from operations rose from $53.5m in H1 FY18 to $55.6m in H1 FY19, driven by the performance of the US and Hunting Titan segments.

In current market conditions, pricing pressure is a feature of the current trading environment and supplying goods and services to oil and gas drilling companies remains highly competitive. As the supply and demand for energy is a key driver of demand for products, Hunting is exposed to the influence of oil and gas prices, and any adverse movements in commodity prices may heighten its exposure to the risks associated with shale drilling.

However, the company remains focused on the ability to respond to commodity price changes and geopolitical volatility. The recent trend in oil prices has supported the demand for the companyâs products from increased production activity. The company is taking initiatives to improve margins and reduce costs. Hunting remains well positioned to capture opportunities in the current market with a strong presence in upstream equipment and service markets, a healthy balance sheet and tightly managed cost base. Through expansion and acquisition, the group has become a leading upstream energy services company.

Daily Chart as at August-29-19, before the market close (Source: Thomson Reuters)