The Financial Times Stock Exchange 100 Index (FTSE 100), colloquially being termed as the "Footsie", consist of 100 companies with the highest market capitalisation listed on the London Stock Exchange. The Footsie stocks are basically the blue-chip companies or the major companies listed in the United Kingdom. Presently it consists of companies which have global operations, so their movement reflects economic and international events as well. On 18 September 2019, FTSE 100 (London benchmark index) was trading at 7,322.24 points, up by 0.03 percent (at GMT 3:55 PM). Here we would be discussing two stocks listed on the FTSE 100 index, Burberry Group PLC, from Clothing and Accessories Sector, and JD Sports Fashion PLC from Apparel Retailers sector.

Burberry Group Plc is the UK-based luxury goods company specialising in leather goods and ready-to-wear items. The company designs, sources, manufactures and distributes luxury menâs, womenâs and childrenâs clothing and non-apparel accessories through directly owned stores, wholesale and licence channels. As on July-18-2002, its shares got listed on the main market of the London Stock Exchange.

On 18th September 2019, the company has been included in the 2019 DJSI (Dow Jones Sustainability Index) for the 5th consecutive year, achieving its highest ever score in the Index, and ranked at 3rd place in the âApparel, Luxury Goods, and Textilesâ sector. The prominent international sustainability metric, the DJSI assesses a groupâs environmental, social, and economic impact and is a trusted benchmark for shareholders who incorporate sustainability considerations into their investments and decision-making. In the financial year 2019, the companyâs market-based emissions decreased by 43 per cent, and it procured 58 per cent of its total energy from renewable sources. The company is currently carbon neutral across its EMEIA retail stores, the United Kingdom, and Americas region operations and intends to be 100 per cent carbon neutral by the year 2022. Based on this, the company set two new, striving climate goals authorised by the SBTi (Science-Based Target initiative) for its expanded supply chain and own operations. During London Fashion Week, the companyâs Spring/Summer 2020 show was accredited as carbon neutral. The company offset its effects, such as the flights of guests travelling to London exclusively for the show and the build and production of the occasion, with VSC-certified REDD+ projects which prevent conserve tropical rainforest and deforestation in the Brazilian Amazon.

6th September 2019, the company announced that they would begin a share repurchase programme of the group's ordinary shares per share of 0.05 pence up to a consideration of Â£150 million (Maximum).

On 14th November 2019, the company will announce the interim results for the financial year 2019.

In the period under review, Men's and women's apparel sales surged by a double-digit percentage, and the group maintained stable guidance for top-line and operating margin at constant exchange rates (CER).

The companyâs revenue was Â£2.7 billion and decreased by 1 per cent at constant exchange rates (CER) against the previous year data. The reported gross profit declined by 2 per cent to Â£1,861 million as compared with the financial year 2018 data of Â£1,897 million, while gross margin stood at 68.4 per cent.

The company is into a creative transition phase to ânew Burberry' under Riccardo Tisciâs, as a Chief Creative Officer, purview. The group declared the financial year 2020 guidance to be generally of balanced revenue and flat operating margin at the constant foreign exchange with more weight towards the H2. The financial year 2020 is the final year of companyâs transition phase rationalising its distribution network (closing 38 small retail stores in secondary locations and closing the United States wholesale non-luxury doors) further in line with the new brand vision.

Marco Gobbetti, as a Chief Executive Officer (CEO) of the company, said that the group had been retained in the 2019 DJSI for the 5th year running. On year on year basis, the enhancements that the company will be making are a testament to the lasting and deep pledge of everyone at the group to protect the environment and support the communities. All have a role in building a more viable prospect and as a group with robust creativity and values at the core. The company have the determination and will to help accomplish this goal.

The company is a founding member of the New Plastics Economy Global Commitment, which intends to remove pollution and plastic waste by the year 2025. In this regard, the company is working to remove unnecessary or problematic plastic packaging. Recently, the company introduced new viable packaging produced from 30m recycled coffee cups, through the resulting product wholly recyclable and accredited by the FSC (Forest Stewardship Council). The company is a founding signatory of The Fashion Pact and UNFCCCâs Fashion Industry Charter.

Daily Chart as at September-18-19, before the market close (Source: Thomson Reuters)

On 15th April 2020, the company will announce the preliminary results. 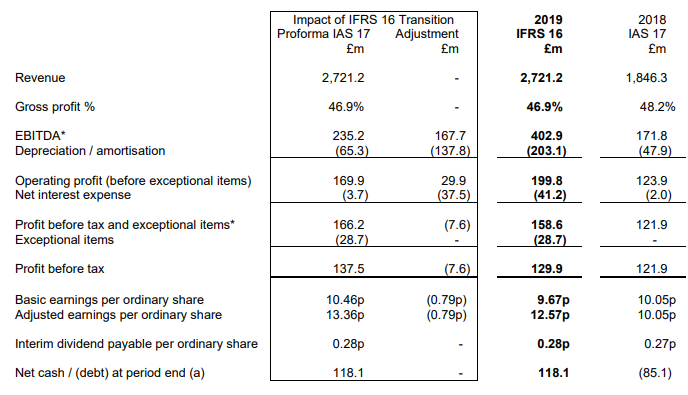 In the second half of 2020, the company continued showing positive trends in Sports Fashion while acknowledging the harder comparatives ahead. The companyâs top-line and the bottom-line performance for the period have improved resulting from an increase in global Sports Fashion in the UK and Ireland markets. Though, the companyâs operation would be impacted by the uncertainty created due to ongoing Brexit as it negatively impacts the companyâs supply chain. The company has a huge reliance on non-UK manufactured products and have to pay extra money as an exchange cost to procure such products.

The company without considering the impacts of IFRS16 transition is well-positioned to provide profit before tax for the full-year 2020 at the top end of market expectations of Â£402-Â£424 million.

Daily Chart as at September-18-19, before the market close (Source: Thomson Reuters)