AorTech International Plc (LON: AOR) is a United Kingdom domiciled Biotechnology company having interest in bioplastic for medical applications. The company is the developer and licensor of the world's leading long-term implantable biostable polymer by the trade name Elast-EonTM and also the developer of medical devices utilising the key properties of Elast-EonTM. The company has been doing research in this field and has developed biostable, implantable polymers with Elast-Eon™ and ECSil™ being its latest offerings. These co-polymers are the world's leading biopolymers for the manufacture of long-term implantable medical devices and are now being manufactured by Biomerics LLC in Utah United States of America on its behalf. The biostability of Elast-Eon™ and ECSil™ is comparable to that of silicone while having excellent blood contacting, mechanical and flex-fatigue properties while also possessing the ability to be shaped using conventional thermoplastic extrusion and moulding techniques. AorTech polymers are proven in long term life enabling applications, having seen implementation in over 6 million implants and more than 10 years of extensive and highly successful clinical use.

Underpinning on the Elast-Eon™ polymer’s best in the class long-term blood contacting properties, all of the initial products being developed by the company are in the field of cardiovascular applications. Implants that are being designed using proprietary Elast-Eon™ based bio-polymers have improved clinical outcomes over the current state of similar device technologies, eliminating the use of animal sourced material while allowing all other related procedures to remain the same. This leads to significant savings in time and energy on the retraining of surgeons on new ways of performing operations.

The Shares of the company have their listing on the London Stock Exchange having been admitted on 18 December 2002. There they trade with the ticker name AOR in the Alternative Investment Market (AIM) segment. The shares of the company are constituents of the FTSE AIM All-Share index.

The company on 29 November 2019 came out with its interim results for the half year period ending on 30 September 2019.

The company remains a biotechnology development stage company with its revenue streams expanding rapidly while strategy on costing is under process.

At the time of writing this report on 05 December 2019, the shares of the company were trading on the London Stock Exchange for GBX 97.5. 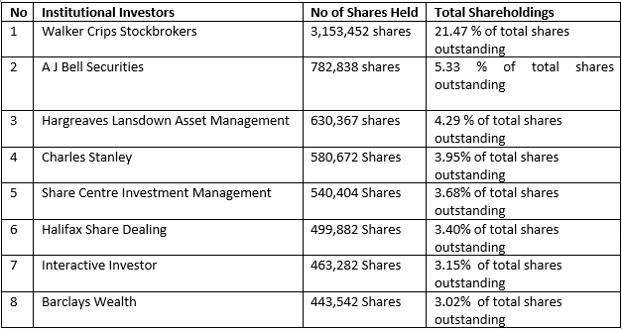 As of 11 October 2019, there was no restriction of the share transfer of the company. There were zero shares of the company that were being held in treasury. 29.75 per cent of the shares were not in public hands and there was a total of 14,686,608 number of shares on issue.

The success of the company’s biopolymer Elast-Eon™ specially in the cardiovascular field gives it immense potential to make deep inroads into the vast and immensely rewarding field of cardiovascular medical devices. The company is currently working on bonding Elast-Eon™ with silicone, that will give rise to a new generation of biopolymer materials with vast medical device applications. The company’s forward integration into manufacturing will give it better control over pricing as well as help it extend its market reach.

The New licence agreement with Medibrane Limited of Israel is of strategic importance to the company. The latter is an expert in encapsulation technology for medical devices, particularly stents, which are used in cardiovascular surgery to prevent blockage of blood vessels. Medibrane would provide design services to AorTech International for the manufacture of devices based on Elast-Eon™ technology.

The management of the company is also comprised of some of the most experienced people in the field of Finance, clinical marketing and cardiovascular medicine, who provide the company the strategic edge to excel in this field.