Mitie Group Plc (MTO) was founded in 1987 and is a provider of facilities management, project management, consultancy services and a wide range of specialized services. It was first in the industry to introduce the technology of “Connected Workspace”. It deploys smart analytics, which provides important insights and mitigates inefficiencies to create better workplaces. The group provides a wide range of services which include mechanical electrical engineering and maintenance, property services, cleaning, catering, landscape services, pest control, security, business services and non-equity involvement in PFI schemes. Their focus is on large businesses, where they offer differentiated products and superior technology, with regular investments being made in improving customer service to create value for shareholders. The company employs around 52,500 people across the country. Financial Highlights for FY2019 (£, million) 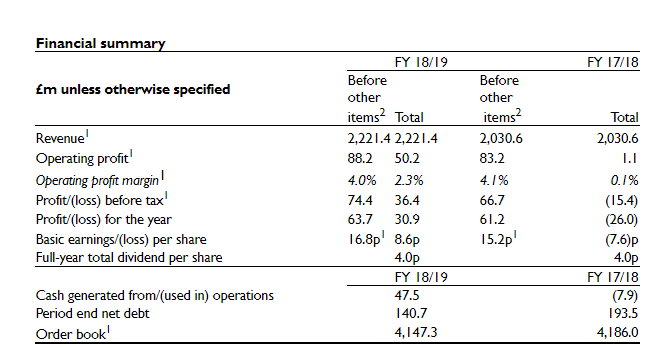 (Source: Annual Report, Company’s website)   Revenue was up by 9.4 per cent to £2.2 billion this year as compared to £2.0 billion in FY18. This increase can be attributed to a contract win in Care & Custody, the acquisition of Vision Security Group (VSG) in Security and significant growth in the Engineering accounts and in Security and Cleaning. Operating profit before other items was up by 6.0 per cent to £88.2 million in FY19 as compared to £83.2 million in the previous year. This surge reflects sound growth in various accounts and projects in Engineering plus the significant contract win in Care & Custody, followed by a significant growth in the Security and the impact of the acquisition of VSG. Operating profit surged to £50.2 million this year against £1.1 million in FY 2018. The company has recommended a final dividend of 2.67 pence, taking total annual dividend to 4.0 pence per share, which was the same as the previous year. The Basic EPS stood at 8.6 pence in FY 2019 against a loss per share of 7.6 pence in FY2018. This year the Group's net debt reduced by £52.8 million to £140.7 million against £193.5 million in FY2018. In FY2019, the consolidated EBITDA stood at £105.9 million and adjusted consolidated EBITDA stood at £103.6 million. MITIE Group PLC is also one of the main contributors of revenues to the UK treasury. It paid £529.3 million this year against £481.2 million in FY2018. Share Price Performance