US Market News: The major indices of Wall Street traded on a mixed note after US Federal Reserve kept its interest rate unchanged and will continue with its monthly bond buying program of $120 billion. Among the gaining stocks, Boeing (BA) shares went up by about 5.45% after the Company reported a surprise profit of around 40 cents per share. Among the declining stocks, Starbucks (SBUX) shares went down by around 2.56%, even after the Company had projected a higher cost for labour and supplies in the coming months. Apple (AAPL) shares dropped by about 1.36% after the Company warned regarding the negative impact of the global chip shortage. Shopify (SHOP) shares fell by about 0.84%, even after the Company had posted quarterly earnings more than the consensus estimates.

UK Market News: The London markets traded in a green zone due to the strong performance of the travel & leisure stocks. According to Nationwide, the average UK house price had demonstrated a marginal monthly drop of around 0.50% during July 2021 after witnessing a record high in June 2021.

FTSE 100 listed Barclays shares went up by about 2.33% after the Company reported a first half profit significantly higher than the consensus estimates. Moreover, the Company had announced a share buyback and resumed dividends.

St James’s Place shares surged by around 5.60% after the Company reported a substantial jump in the first half underlying cash driven by a sharp increase in fund under management.

Aston Martin Lagonda Global Holdings had narrowed down the net loss during the first half benefitted by significant growth in the top-line revenue. Furthermore, the shares grew by around 2.36%.

Fresnillo shares climbed by around 6.95% after the Company stated that it remained on track to meet full-year targets. Moreover, the Company had achieved strong growth of around 18% in the silver production during the second quarter. 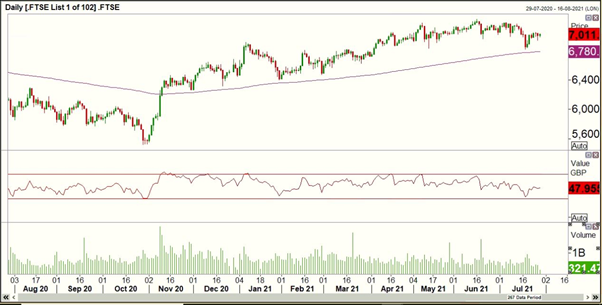