US Market News: The major indices of Wall Street traded in a red zone after the release of the US inflation data. Among the gaining stocks, Affirm Holdings (AFRM) shares surged by around 28.45% after the Company’s quarterly revenue came out to be more than the estimates.  Among the declining stocks, Take-Two Interactive Software (TTWO) shares went down by about 1.80% after delaying the “Grand Theft Auto” video game by four months. Toyota Motor Corp (TM) shares dropped by around 1.57% after the Company reduced the annual production target by 300,000 vehicles because of the disruption in Vietnam and Malaysia’s factories. Bausch Health (BHC) shares fell by around 0.49% after the Company decided to settle a lawsuit regarding the diabetes drug Glumetza.

UK Market News: The London markets traded on a mixed note after the release of several macroeconomic indicators. Moreover, the UK GDP had shown a month-on-month increase of around 0.10% during July 2021, the slowest since January 2021. Furthermore, the manufacturing output remained unchanged during July 2021. Meanwhile, the UK trade deficit remained larger than expected at £12.71 billion.

Spectris shares went up by about 0.65% after the Company completed the share buyback programme for a maximum consideration of up to £200 million.

PureTech Health shares dropped by around 0.15%, even after the Company’s Vor Biopharma unit announced that VOR33 got US FDA approval for Acute Myeloid Leukaemia.

Gresham House had agreed to purchase Venture Capital Trust business for initial consideration of £24.0 million. Furthermore, the shares rose by around 1.08%.

Cineworld Group shares went down by around 1.05% after the Company reached an agreement with dissenting shareholders of Regal Entertainment Group. 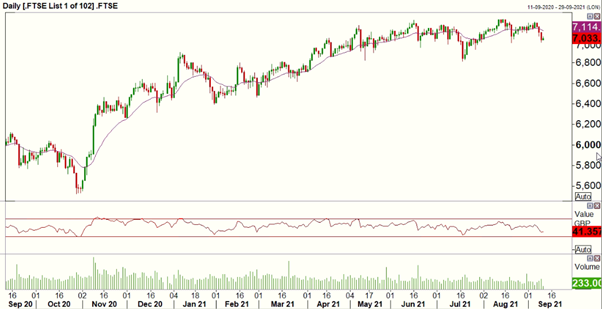