US Market News: The major indices of Wall Street traded on a mixed note due to ongoing fears regarding rising Covid-19 cases worldwide. Among the gaining stocks, Hasbro (HAS) shares surged by about 12.60% after the Company reported quarterly earnings and revenue more than the consensus estimates. Otis Worldwide (OTIS) shares went up by about 0.64% after the Company’s quarterly earnings came out to be more than the consensus estimates. Among the declining stocks, Tencent Music Entertainment Group (TME) shares went down by about 5.38% after the Company was barred by regulators from holding exclusive rights to online music. Didi Global (DIDI) shares dropped by around 1.80% after the Company was downgraded to “neutral” by Atlantic Equities.

UK Market News: The London markets traded on a mixed note as investors waited for the flurry of corporate results to be released this week. Moreover, Bitcoin witnessed a jump of around 13%, riding on the speculation that Amazon might be venturing into digital currencies.

Food Producer Cranswick shares grew by about 2.45% after the Company reported a rise in the first quarter revenue boosted by robust retail business and strong poultry sales.

Budget Airline Ryanair Holdings shares surged by around 4.32% after the Company lifted the traffic forecast due to a significant increase in the bookings in recent weeks.

B&M European Value Retail was downgraded to “sector perform” by RBC Capital Markets.  Furthermore, the shares went down by around 2.42%.

Kanabo Group shares climbed by around 8.33% after the Company announced a proposed acquisition of the leading European Medical Cannabis Producer & Distributor, Materia. 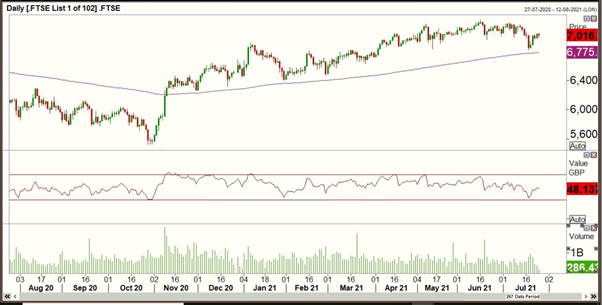 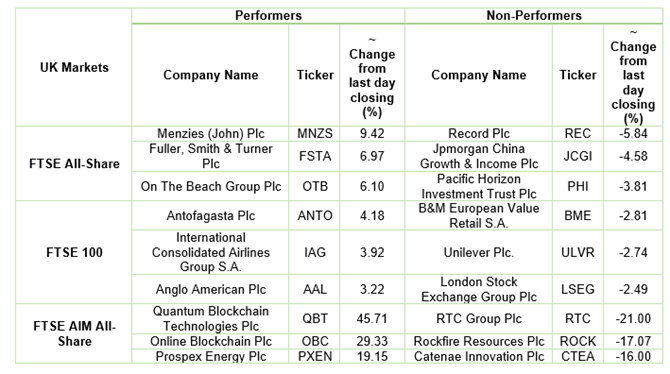