Dominos Pizza Group plc (LON: DOM) announced on 14 September 2020 to create 5000 new jobs. One of the prominent pizza delivery chains in the UK, Domino’s Pizza, additionally said that it would support in excess of 1000 placements under the government’s Kickstart Scheme.

The pizza chain is geared up for the busiest trading time of the year and looks forward to add the roles of chefs, delivery drivers, and customer service staff, among others. Domino’s informed that around 80 per cent of its store managers had begun their career with the pizza chain as a delivery driver or pizza chef.

The recent announcement regarding job creations at Domino’s Pizza is in addition to the 6000 new positions that the restaurant business has provided in the UK since the outbreak of the coronavirus pandemic.

Highlighting on the benefits that the pizza chain has attained by keeping its stores functioning during the coronavirus pandemic, Domino’s Pizza commented that it served as an advantage to the business. The company is in a position to provide thousands of people with jobs by keeping its stores running and generating revenue.

It is to be recalled that in May 2020, Dominic Paul, joined Domino’s Pizza as its new chief executive. Paul was earlier with another restaurant business called Costa Coffee. Expressing delight to support the government’s Kickstart Scheme, Paul mentioned that it would give youngsters an opportunity to return to work as well as strengthen their lifelong skills that they would receive through the training curriculum. The new creation of around 6000 jobs would be instrumental in assisting Domino’s to serve the local communities with necessary Covid-19 safety measures as the festive period approaches.

Under the UK government’s Kickstart Scheme, the pizza chain has promised to induct more than 1000 youngsters in its various stores across England, Scotland, and Wales. Domino’s Pizza would offer roles to successful young people between the age group of 16 and 24 under the Treasury’s £2 billion job creation scheme. Domino’s Pizza would provide these youngsters with on-the-job training, besides accessibility to the new e-learning training modules on various key skills, including time management and teamwork. 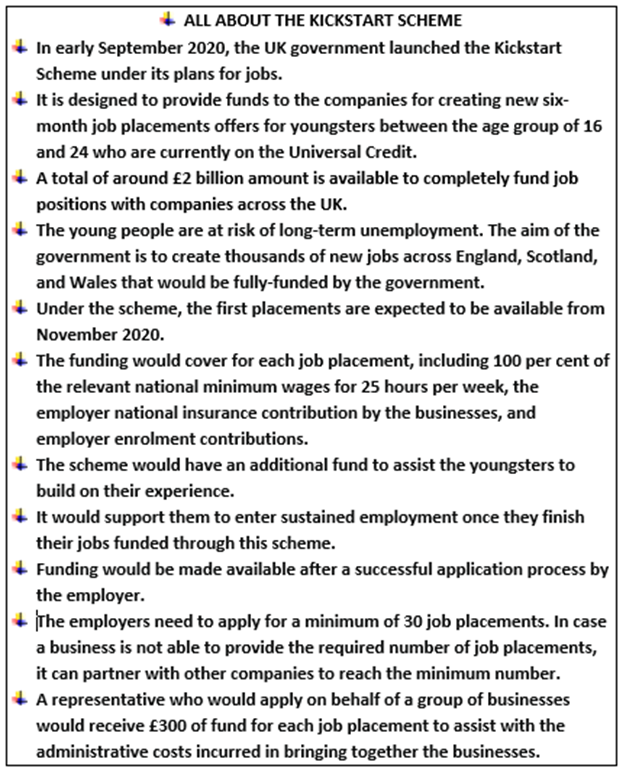 It is to be noted that urban areas like London had observed a considerable reduction in the footfalls to the stores during the pandemic and there was a surge in online delivery orders. Since the outbreak of the coronavirus pandemic, Domino’s Pizza had undertaken measures for protecting both its staff and customers by launching contact-free delivery.

The pizza chain has recently added some new choices to its menu list. In 2019, Domino’s had sold approximately 90 million pizzas and earlier this month launched a new vegan-friendly range.

In the UK, Domino’s Pizza operates under licence from its United States (US) parent company. With around 1,184 stores across the UK and Ireland, it has a workforce of around 35,000 people. Though, majority of the outlets are run by franchisees, it currently has 36 company-owned outlets in London.

Domino’s Pizza released its interim results for the 26 weeks ended 28 June 2020 in early August 2020. The company reported a statutory profit before tax from continuing operations at £45.8 million for the period as compared to £40.3 million for the consecutive period in 2019. The company’s new management team provided an efficient leadership during the coronavirus-induced lockdown period and formed relationships with its franchisees to start work creating long-term strategic initiatives.

The management prioritised the safety of its people, franchisees, and customers by relevant steps on operating procedures and customer offerings. Domino’s worked with its suppliers to maintain around 99.9 per cent availability and accuracy of supply chain processes, resulting in raising the levels of customer satisfaction.

Domino’s speeded up its online business activities and the sales rose by 15 per cent across the UK for the 26-week period in 2020 as compared to the corresponding period in the previous year 2019. The online sales in the UK accounted for 93 per cent of the entire delivery sales for the company. Stressing on the encouraging trading during the first few weeks of the second half, Domino’s stressed that it was not easy to estimate the changing consumer behavior for coming uncertain times. The pizza chain showed confidence in its brand value and operational aspects for looking ahead to the rest of the financial year as well as long-term future of trading.

A look at the job market scenario

The new job creations at Domino’s reflect the rise in demand during the pandemic and considerable shift towards online delivery orders in recent times. The announcement by Domino’s follows some other recent respite in the job market wherein online retailers, supermarket majors, and courier companies such as Tesco and DPD have significantly added to their workforce. However, the retail and leisure industries have suffered the most due to the coronavirus-led crisis. As per an estimate from the Centre for Retail Research, the UK shopping sector has lost around 125,000 jobs. UK Hospitality, a trade body for the leisure industry, has recently cautioned that around 450,000 of the one million workers in the pubs and hospitality sector who are still on furlough are likely to lose their jobs.

The creation of additional 5000 jobs at Domino’s along with around 1000 apprentice roles for the youngsters is a positive step and in the job market that has been under pressure during the coronavirus pandemic. Domino’s has mentioned that it managed to have successful trading during the coronavius pandemic as it kept its outlets open as compared to others in the sector. The government’s recently launched measures such as the Kickstart Scheme seems to be an effort in the right direction to bring back the youngsters to the job market. The companies need to think strategically and generate higher demand from the consumers. The companies need to make best use of the kickstart scheme to make it successful and benefit from it in the long-run, thereby accelerating the economic recovery process.