The company is listed on the AIM segment of the London Stock Exchange, where its shares trade with the ticker name BPC.

The company on 3 September 2019 came out with updates about the technical work being carried out in its crude prospect areas in the Bahamas. The update contains four reports containing details of the areas 3D seismic image, paleogeographic construction and oil sample analysis report of the prospect.

The company has been for some time looking for a farm out partner, it hopes that these reports will de-risk its prospects to some extent and help it secure farm-out partners.

The stock price of Bahamas Petroleum Company Plc had been underperforming the AIM All Share index since the beginning of 1 January 2019. During the month of February 2019 there were speculations that the company is in talks with potential farm-in partners, this news caused the shares of the company to experience a major spike and stay the same all through the month. The company in a press release on 28 February 2019 clarified that it is definitely in talks with potential farm-in partners, but no definitive agreements have been arrived at, this calmed down the prices but they continued to outperform the index with a major upward flip in August 2019 and have been in uptrend till the time of preparation of this report on 03 September 2019.

Price Chart as on 03 September 2019, before the market close (Source: Thomson Reuters)

On 03 September 2019, at the time of writing of the report (before the market close, GMT 08.30 AM), BPC shares were trading on the London Stock Exchange at GBX 3.003. The shares of the company have been on an upward trend since 28 August 2019, which continued till the end of trading day on 30 August 2019, since then the stock prices of Bahamas Petroleum Company Plc have been witnessing a sideward movement with a minor flip on 03 September 2019 early trading.

The company is actively looking for farm-in partners who will provide further funding to continue with its operations. The technical report published on 03 September 2019 provide clarity of the value of the crude reserve contained in the prospect. Most of the potential farm-in partners look out for projects which have been de-risked, or the presence of crude within the prospect is confirmed with supporting technical evidence. The reports published on 3 September 2019 are meant to convey that the company’s prospect is de-risked and drill ready.

Wizz Air Holdings Plc (WIZZ) is a holding company of the Hungarian low-cost carrier Wizz Air. The carrier serves destinations in Europe, North America and the Middle East. The airline, although not being the national flag carrier of Hungary is the largest carrier of the country in terms of fleet size. The company has its operational hub at the Budapest Airport from where it operated services to 60 destinations ferrying nearly 33.8 million passengers in 2018.

The company’s shares are listed at the London Stock Exchange where its shares trade with the ticker name WIZZ. The shares of the company are also constituents of the FTSE 250 index.

The company on 3 September 2019 came out with its August 2019 traffic and CO2 Emission Statistics. The airline’s passenger numbers grew in August 2019 to a record number of more than 4 million passengers ferried, this is the first time the company has achieved this monthly benchmark in its history. Load factor increased to 96.3 per cent. 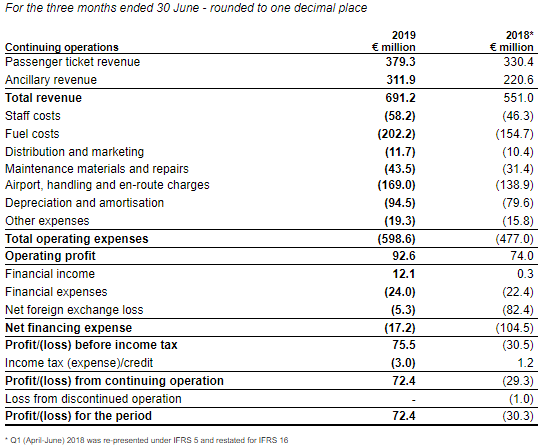 The share prices of Wizz Air Holdings Plc had moved in consonance with the FTSE 250 index since 1 January 2019 till the mid of March 2019. From mid-March 2019 the company it started to outperform the index consistently with a minor dip in mid of May 2019 and has been doing so till the time of preparation of this report on 3 September 2019.

Price Chart as on 03 September 2019, before the market close (Source: Thomson Reuters)

On 03 September 2019, at the time of writing of the report (before the market close, GMT 10.35 AM), WIZZ shares were trading on the London Stock Exchange at GBX 3589.00. The share prices of Wizz Air Holdings Plc had been on a sideward movement since 28 August 2019. The trend continues till the time of preparation of this report on 03 September 2019.

The company is one of the most successful low-cost airline companies to operate in Europe. The airline’s number of passengers carried has increased by 20.1 per cent in April-June 2019 quarter, revenues have increased by 25.4 percent cash and cash equivalents have swelled by 31.1 percent, this quarter against the corresponding quarter of April-June 2018. Two new aircrafts have been added to the airline’s existing fleet in the quarter April-June 2019, taking the total number of aircrafts operated by the airline to 114, with the average age of an aircraft being 4.9 years.

The management of the airline has upgraded its full year capacity growth rate guidance from 16 per cent to 20 per cent despite the strength in Jet Fuel prices. The company is confident that it will be able to meet its net profit guidance to be between €320 million to €350 million for the full year 2019-20. This has been possible due the heightened growth rate in revenues in this quarter (April-June 2019).

The airline does not seem to have been affected by the looming recessionary business environment under which Continental Europe is currently reeling. Where capacities are being reduced by other airlines due to high cost and low capacities considerations, the revenues seem to be swelling in the fold of Wizz air. The company’s low-cost model is working wonders and continue to create value for all its stakeholders in any and all types of economic conditions.