Starling Bank IPO: When can you buy shares of this digital bank?

UK based digital bank Starling Bank is likely to launch its initial public offering (IPO) in the coming two years, according to its CEO, Anne Boden.

Earlier this month, the bank had said it would likely list in London, which also happens to be Starling’s headquarters. However, last week, Starling said that it could be tempted to choose a non-UK IPO.

In March, the challenger bank reached a valuation of £1.1 billion (or US$ 1.5 billion), thus achieving the coveted unicorn status in the fintech space.

It reached the valuation after a series D funding round of £272 million (US$ 367 million), which was led by financial services company Fidelity Management & Research Company. The funding helped the bank become one of the biggest unicorn firms in Europe. 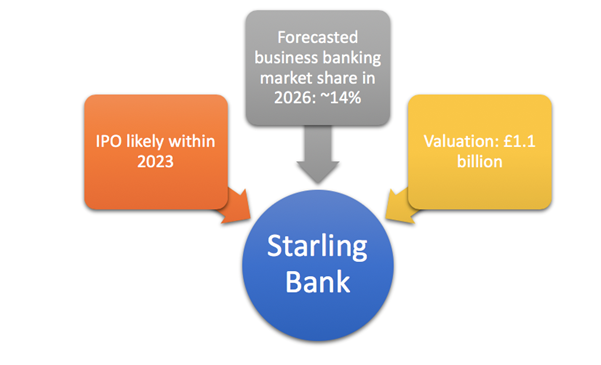 The bank, which was founded in 2014, plans to use the funds from its last funding round to help with its European expansion plans and for funding potential mergers and acquisitions.

Its business accounts rose to 374,000, compared to 180,000 accounts in the year before, thus continuing to be one of the bank’s main growth drivers.

Starling’s total accounts thus rose to 2.1 million, and its lending stood as £2.2 billion for the period. It also narrowed its losses, reporting a loss after tax of £23.3 million, compared to £52.1 million in the year before.

Also, the bank has remained profitable on a monthly basis for 11 months, since October 2020.

The bank stated it aims to overtake banking major and one of the Big Five banks in the UK, Barclays, in the next five years in the business banking segment.

Ms Boden stated it is a very realistic time period for Starling to overtake Barclays and to increase Starling’s market share by 2x in the small business market.

Another fintech giant Wise went the direct listing route to debut on the LSE earlier this year in July. Wise had a market valuation of about £8 billion.