The UK’s number one supplier of cookware and kitchenware products, ProCook, is mulling an initial public offering (IPO) on the main market of the London Stock Exchange (LSE).

The company’s IPO plan was disclosed after it reported strong FY 2021 results recently.

The company’s market valuation is expected to be in a range between £250 million and £300 million, according to reports.

ProCook’s admission to the LSE is expected to occur in November, though the company will confirm its final IPO price and other details later ahead of its listing.

ProCook, which was founded in 1993, stated that the IPO would also include its existing shareholders to sell their shares for the listing.

The company expects a minimum free float of 25 per cent of its issued share capital upon being admitted into the LSE. The company thus expects that it would make it eligible to be included in the UK FTSE indices.

The company’s CEO and founder, Daniel O'Neill, recently confirmed that it would also include a share offer for its staff.  The company has about 700 employees at present, of which about 200 staff are based in the company’s headquarters at Waterwells Business Park in Gloucester, UK. 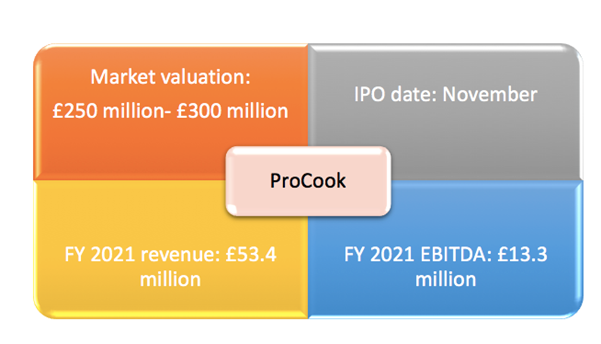 The company plans to use the proceeds from the IPO to help its growth strategy, which includes improving ProCook’s brand awareness and public profile. It also intends to use the capital raised to increase the company’s talent acquisition and retention rate.

Also, the company intends to expand its product ranges and other offerings.

The company selected London as its IPO destination instead of selling to a private buyer in order to retain control of the business and maintain its long-term vision.

ProCook is an e-commerce business that has now evolved into a multi-channel business, with over 50 retail stores across the UK and counting. It also sells to the EU via a third-party marketplace.

ProCook started off as a family business that sold cookware products via direct mail in the UK over 25 years ago.

The company’s revenue rose sharply by 37 per cent to £53.4 million for the financial year ending in April. It also estimates to have a turnover growth between 30 per cent to 40 per cent for the current fiscal year.

Also, its FY 2021 adjusted earnings before interest, tax, depreciation and amortisation (EBITDA) increased by a whopping 246 per cent to £13.3 million.

This is the latest e-commerce business to announce its intention to go public amid an e-commerce IPO boom this year. Earlier, online furniture retailer Made.com and global mass beauty and personal care business Revolution Beauty Group had both listed on the LSE this year