The group’s oversubscribed IPO made it one of the largest floats in the investment trust space in the UK.

The company would start trading on the main market segment of the London Stock Exchange (LSE) under the ticker symbol ‘PINT’, with its initial admission becoming effective and trading set to commence from 8.00 AM BST on 16 November.

The group had targeted an IPO size of about £300 million with a maximum size of £400 million. The IPO had an issue price of 100 pence per share. After the oversubscription, the group had to undertake a scaling-back exercise.

The group has made an application for the admission of its 400 million ordinary shares and 80 million subscription shares in the premium and standard segments, respectively.

The group’s total net asset value (NAV) return is likely to be in a range of 8 per cent to 10 per cent per annum. It aims to garner this NAV by investing in equity and equity-related investments in private infrastructure assets.

The company plans to use the net proceeds from the IPO for its expansion and investment strategy. 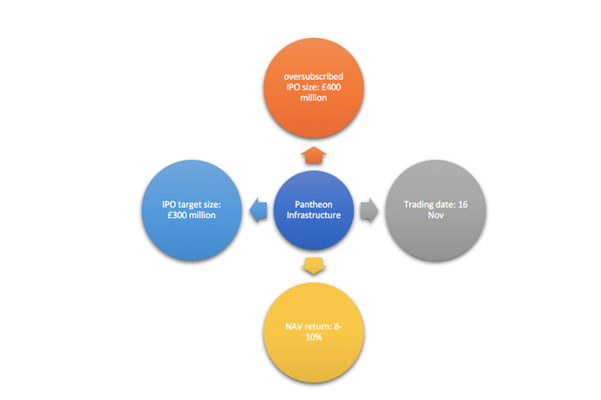 The investment trust plans to invest in digital infrastructure such as wireless towers, data centres, and fibre-optic network.

It also aims to target the renewable energy and energy efficiency space by investing across smart infrastructure, wind, solar, and sustainable waste.

Some other areas the trust plans to target its investments are in the power and utilities sector, transport and logistics space and other areas.

However, the trust will not make any investments in fossil fuels such as coal, oil or even in the upstream gas sector. It also does not intend to invest in nuclear energy or the mining sector.

Private equity firm Pantheon Ventures will be the trust’s investment manager.  Since 2015, Pantheon Ventures has undertaken 34 co-investment transactions, which had a total size of US$ 2.7 billion and a gross internal rate of return of 18.5 per cent.

The group’s oversubscription comes as sustainable investing has come into the fore as the world seeks to tackle the climate challenge.

Pantheon’s partner, Richard Sem, said that there is a rising investment requirement in several different infrastructure sectors where the deployment of private capital is going to play an increasingly important role in the global transition towards a low carbon economy.