Mylan N.V. (MYL) is a Canonsburg, Pennsylvania-based international pharmaceutical company. The group licenses, develops, manufactures, brand name, markets and distributes generic, and OTC (over the counter) products in a variety of therapeutic categories and dosage forms. The company’s operations are differentiated in three geographic segments, namely, North America, Europe and ROW (Rest of World). The group's Cold-EEZE family of brands comprises gummies, caplets, OTC cold remedies sold as lozenges, QuickMelts, oral sprays, and oral liquid dosage forms in the United States. The company offers 7 billion people access to high quality and provides an increasing portfolio of more than 7,500 products. The products are sold in more than 165 territories and countries, and around 35,000-solid workforce is devoted to creating better health for a better world. 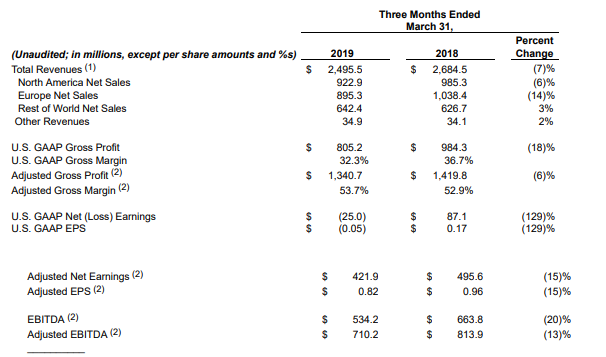 On 15th July 2019, the company announced an update on a regulatory plan for ALKS 3831, an oral atypical antipsychotic drug candidate. It has been developed to provide effectiveness of olanzapine, minimizing the weight gain associated with olanzapine. The company is planning to expand the NDA (New Drug Application) after a meeting with the United States FDA (Food and Drug Administration). The NDA will include data in identifying signs for the treatment of manic or mixed episodes associated with bipolar I disorder and for maintenance treatment of bipolar I disorder; and an indication for the treatment of schizophrenia.

In Q1 FY19, net loss according to generally accepted accounting principles in the U.S. (GAAP) increased to $96.4 million as compared with the corresponding period of the last year data. Basic and diluted GAAP net loss per share was $0.62, an increase from the Q1 FY18 net loss of $0.40. Non-GAAP net loss surged to $26.0 million against the loss of $14.2 million in Q1 FY18. Non-GAAP basic and diluted net loss per share stood at $0.17.

Its shares are listed on the Nasdaq Stock Exchange. On 17th July 2019, ALKS shares closed at USD 23.09 and decreased by 1.24 per cent against the previous day closing price. Stock's 52 weeks High and Low is USD 46.98/USD 21.29. Total outstanding market capitalisation was US$3.62 billion.

Abcam PLC (ABC) is a leading global life sciences company in the United Kingdom. The group is into providing scientific support and tools for the research and clinical community and provides validated antibodies and other binders and assays. The company serves researchers in more than 140 countries with the help of across 1,100 people spread over 11 locations.

On 16th July 2019, the company announced the acquisition of the whole lysates portfolio and live-cell line of the company, EdiGene Inc, a leading company mainly attention on developing genome editing technologies into novel therapeutics for a wide range of diseases and into creative solutions to advance drug discovery. 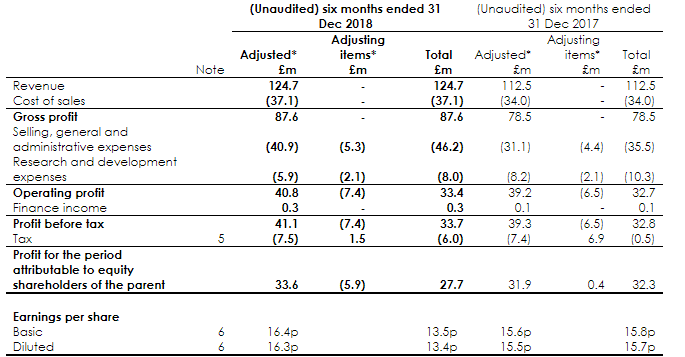 The company, through acquisition and investment, is looking for expansion into new markets, geographic areas and technologies and applications to drive low digit growth trajectory with good-looking margins. While higher investments have led to downward expectations for an annual adjusted cash profit margins to 35 per cent from 36 per cent, yearly revenue growth is estimated to be in line with the H1 only. The continued smoothness in Japan is impacting top-line numbers, and the company is facing a risk from the surged competition as well.

Genus plc (GNS) is a Basingstoke, the United Kingdom-based animal genetics company, which offers farmers with high quality genetics that helps them to produce animal protein, in the form of milk and meat. The company’s business is differentiated in four segments: Genus Asia, Genus PIC, Genus ABS, and Research and Development. The company’s main product is bull semen in the dairy and beef markets. The group provides embryos through its subsidiary, In Vitro Brasil S.A.

On 16th May 2019, the company had reached a collaboration deal with a Chinese rival to work towards regulatory approval in the country for an “elite” breed of pigs resistant to significant disease.  The agreement will see Genus work with Beijing Capital Agribusiness (BCA) to “research, develop, register and market” pigs it has bred to be resistant to porcine reproductive and respiratory syndrome (PRRS) virus — a disease that can cause reproductive failure, reduced growth and early death for the farm animals.

The company will receive an initial $20 million cash payment and a further $120-160 million following the creation of a joint venture after the receipt of regulatory approval. 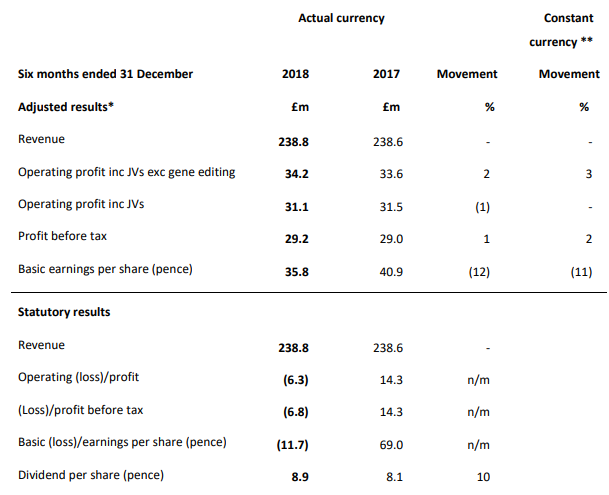 In H1 FY19, on an adjusted basis, the company’s revenue slightly increased to £238.8 million as compared with the corresponding period of the last year. Profit before tax surged by 1 per cent to £29.2 million against the £29 million in H1 FY18 and increased by 2 per cent at constant currency. Basic earnings per share stood at 35.8 pence, a decrease of 12 per cent from the previous year same period data. Basic EPS declined by 11 per cent at constant currency.

The company performed decently in the first half of the financial year 2019, despite ASF (African Swine Fever) headwinds in China. Though the situation in China remains challenging and volatile, the company expects to make continued strategic and financial progress in the H2 FY19 and to perform in line with the Board’s prospects in constant currency.